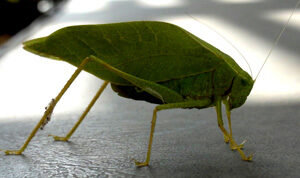 The Leaf Bug – A Master Of Deception

Take a picture of a leaf bug, from the top, and it looks exactly like a picture of a leaf. You really can’t tell it’s a bug at all, which is probably the bug’s reason for such a clever disguise. This bug is of the order Phasmida and is sometimes referred to as a phasmid. It is found primarily in Australia and Southeast Asia.

A Creature From Outer Space? – The leaf bug is closely related to another weird looking bug, the walking stick bug, and if you look at the bug from the side and not from the top, you can see there is a definite relationship. Other than its leaf-like camouflage, the leaf bug is truly a strange looking creature, something out of science fiction. There are some 35 or so species of leaf bugs, and like most insects, they have been around long enough to be found in fossils from millions or years past.

Easy Keepers, If You Have A Good Supply Of Leaves – The leaf bug is often kept as a pet. Like the koala, one of its primary food sources is the eucalyptus leaf, although in captivity it will be perfectly happy with a diet of raspberry or blackberry leaves. They also seem to have a fondness for eating the young of other bugs, though they are not known to eat there own young. If you have one as a pet, it will get its water from the plants it eats although to keep the pet healthy it should be lightly misted once a day. The lifespan of the leaf bug is less than a year, but a female can lay several hundred eggs during that span of time, so the population remains for the most part quite stable. If you have leaf bugs as pets, they will generally continue to reproduce as long as they are well cared for.

A small aquarium makes a good home for this insect. Just make certain whatever container you choose is not too small, or accumulating condensation may cause the insect to drown¬† You need to keep a fresh supply of leaves on hand which, in some areas can be a problem in the wintertime. Evergreen oak is one solution, if eucalyptus or berry bush leaves are not available. Sometimes a bug will refuse to eat. This problem can often be solved by cutting pieces of fresh leaves, revealing their juicy interiors. Lightly misting the leaves can also entice the bugs to take a bite, and give them needed water at the same time.

Lost Limbs Replaced, Up To A Point – A leaf bug can be held in your hand, but must be handled with care. One of the characteristics of this insect is, if not handled with great care, it has a tendency to lose a leg rather easily. If the bug is not fully grown, it will replace the leg the next time it moults, but once it becomes a fully grown adult, a lost limb will not be regrown. If your pet leaf bug lays eggs, they need to be kept in a warm location, and misted once a day for up to six months, although at times they will hatch sooner.

Good Camouflage Can Have Its Drawbacks – Leaf bugs are not inherently cannibalistic, and usually do not fight with one another, but because of their nearly foolproof camouflage, have occasionally been seen nibbling on one another, seemingly mistaking the other bug for a real leaf. If frightened by spiders, or people, the bug will often play dead by falling on its back, or swaying gently like a leaf in a breeze. Spiders appear to be the main predator of this insect, so if you have a bug collection, don’t include spiders.

Those who have kept these remarkable insects as pets seem to be quite taken with them. Given proper housing, protection from predators, and a regular supply of fresh leaves, you can enjoy watching these gentle leaf impostors for many years.