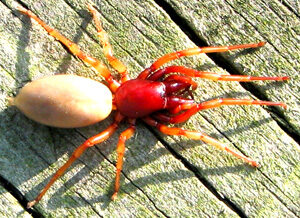 Important Information on the Woodlouse Spider

Few people like spiders simple due to fear of being bitten and the woodlouse spider is no different.  While spiders actually play an important role, keeping destructive insects out of gardens, but many are also dangerous.  This particular spider species only searches for one kind of food – woodlice, thus the name.

Female spiders are actually larger than males but they all have dark red legs and thorax and a yellow brown colored belly.  However, the size of the chelicerae is most noticeable in that it is disproportioned.  Typically, the woodlouse spider hangs around in areas that are warm, such as under logs.  While some spiders have been found inside homes, this is rare.  During the day, the spider creates silk cocoons but at night, the spider leaves to hunt for lice.

An interesting fact about the woodlouse spider is that the mating process is quite dangerous.  During breeding, both the male and female become aggressive and due to the oversized chelicerae, some spiders are injured.  After mating, the female will go back to the silk cocoon where she lays eggs.  While some controversy exists about caring of the eggs, most experts believe the female is the caregiver.

Unfortunately, being bitten by a woodlouse spider is a painful experience but the venom is not strong so there is no threat of serious illness or death.  Most often, the bite site becomes slightly red and swollen but within 30 minutes to an hour, it dissipates.  One important note – this spider species is sometimes confused with the very dangerous brown recluse spider.  Therefore, if you have any concern, try to capture the spider if possible.  Regardless, you should see a doctor right away.

The fangs of the woodlouse spider are enough to scare anyone.  They are extremely large when extended.  However, this spider keeps its fangs tucked out of way so they are completely inconspicuous.  We do know that to bite through the tough skin of lice, the fangs must be strong.  The good news is that this spider is usually more afraid of humans than we are of them so if you see one, chances are the spider is going to scramble out of your way.

To avoid any risk of being bitten by the woodlouse spider, it would be worth wearing thick gardening gloves anytime you work around wood or fireplace logs stored outside.  In addition, this spider species will hide under other types of debris so protective gloves is always to your advantage, not just for this spider but other species as well, especially the black widow and brown recluse.

The woodlouse spider originates from Europe and over the years, it has been introduced to Australia and North America.  While this spider is not as prevalent in areas outside of Europe, they do exist.  If you encounter a spider, simply move away and allow the spider to retreat to a dark, hidden area.  Again, if you should be bitten and you have more of a reaction than moderate pain that lasts less than an hour, never hesitate in seeing your doctor.