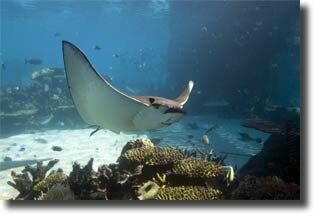 Just What Do Stingrays Eat Anyway?

Answering the question “What do stingrays eat?” can be a little complicated and difficult because stingrays are for the most part nocturnal feeders. We know something about their food preferences in captivity but that is mainly because they eat what they are fed. Fortunately they can subsist on a wide variety of foods, so they can be kept healthy in captivity even though their diet may have changed from what once was their natural diet. Stingrays in captivity are often fed squid, and do perfectly fine, although they seldom pursue squid in their natural environment.

What Bottom Feeders Eat – Stingrays fall into two general categories, bottom feeders and swimmers, with some species doing a bit of both. Bottom feeders are the most dangerous to humans, not because they are aggressive, in fact they are quite docile. But they can be difficult so see if they are buried in the sand, often the case during the day, and can deliver a toxic sting if they are stepped on or otherwise molested or handled. When they are allowed to go about their business, the bottom feeders, called benthic types, eat mainly shellfish, mollusks, and bivalves. Most, though not all, stingrays have strong jaws, permitting them to crack open the shells of clams and mussels, and for that matter any hard-shelled creature they encounter. Their mouths are on their undersides and perfectly situated for digging for their food on the ocean floor or prying it from rocks. Worms are also a major part of the stingray’s diet, and while they generally don’t spend time hunting for fish they will eat fish if the opportunity presents itself.

What The Swimmers Eat – The swimmers, called pelagic rays, also are for the most part bottom feeders, but several species rely on plankton as their main source of food. The manta ray, a very large stingray (whose stinger is not toxic by the way), could easily lead one to believe the answer to “What do stingrays eat?” might be “you and me”. They certainly appear big enough. Manta rays however are docile creatures, generally very friendly towards humans, and their diet consists of plankton.

Unnatural Feeding Habits – In some areas, particularly around some of the Caribbean islands, hand feeding stingrays has become a popular tourist attraction. While this can be done from a boat, it is often done on a sandbar, where one can stand in waist deep water and feed the rays as they swim by. Though the stingrays are not aggressive, accidents can happen, and their stings can be lethal. When one sees pictures of a tourist or tour guide holding a stingray out of the water, either the species is known not to have a dangerous sting, or the person involved is not the brightest crayon in the box. In addition, this practice can completely change the stingray’s eating habits, from that of being strictly a nocturnal feeder, to a daytime feeder mooching for handouts. Whether this is harmful to the stingray or not has not been firmly established.

Summary – What do stingrays eat? If you are a worm, crab, clam, or anything that lives in a shell, you’ll make a good meal for the stingray. If you are a member of the plankton family you are also vulnerable if there are certain species of stingray in the neighborhood. If you are a stingray, your main problem will be with sharks, and to a lesser extend, humans. Stingrays are themselves edible. Portions of the stingray are considered highly prized as seafood, though some parts are too tough and chewy. The stinger can serve other purposes.