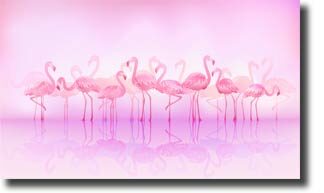 Just what do flamingos eat anyway? Although the answer is not too surprising, a couple of facts regarding their eating habits border a bit on the unusual. Their preferred habitat also gives some clues as to what their choice of food is.

There are five different species of flamingo, one living Africa, three in Central and South America, and a species native to the Caribbean area, including the southernmost parts of the United States. All species are rather tall birds, averaging around 4 feet in height, if not a bit taller. Most of the time when you see a group of flamingos, called a colony, they are either preening themselves, eating, or simply standing on one leg. One would thing they would get tired of standing on a single leg for long periods of time, but that is their preferred, and presumably most comfortable and restful way of standing. Watch a colony long enough, and they may even march for you. It isn’t clear why flamingos march, but they do, moving about in synchronized movements. Watching flamingos fly can also be quite a sight. A colony in flight makes for a colorful picture, but a flock of several thousand in flight is indeed something to behold.

You Are What You Eat – What do flamingos eat? Their favorite food is shrimp, and this is the food that gives the flamingo its characteristic pink color. Some species are more crimson than pink, but it is the diet of shrimp that is responsible for that as well. Flamingos are not born pink or crimson, but gray, and remain that color for the first 2 to 3 years of their life. The bird’s diet of shrimp is responsible for its turning pink, a shade of red, or crimson, later in life. The reason behind this is that the shrimp is particularly high in beta-carotene, the same substance that is found in carrots, and the same substance that can give our skin a slightly orange hue should we eat large amounts of carrots over a period of time. If a young flamingo’s diet is deprived of shrimp, but it gets enough other nutrients to survive and grow, it will end up as a white flamingo. Flamingos in zoos at one time had a habit of turning from pink to white, until zoo keepers discovered the flamingos needed a diet of shrimp to retain their pink or red coloring. In one sense, the flamingo adds credence to the saying “You are what you eat”.

Upside Down Dinner – Another way to answer the question, “What do flamingos eat?”, is to look at how they eat. Not too many creatures choose to eat with their heads upside down, unless their hanging from something. Flamingos do just that, while standing upright. Their boomerang-shaped bill with its flat upper surface skims back and forth, upside down, in shallow water. Food, primarily algae, on both the surface and bottom is stirred up and strained through the bills. Flamingos do most of their feeding in two feet or less of water, and mainly in salt water or brackish water. When they drink, they seek a source of fresh water.

Flamingos feed in marshlands and shallow lakes as well and often in places where there is not much in the way of vegetation. In such places, predators are few, and competition for food is also almost nonexistent. The main danger flamingos face is the destruction of the wetlands they rely upon for both food and for nesting. Since large colonies can live in an area of marshland, destruction of this wetland can have a telling effect on the size of future flocks and colonies.

What do flamingos eat?  Think eating upside down, and think pink!