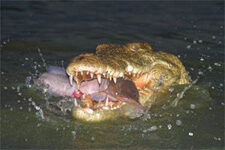 What Do Crocodiles Eat?

What do crocodiles eat?  That is a really good question and it is important to remember that they are capable of capturing almost any animal that is within their range.  However, before we get into that, let us take a minute to fully understand what a crocodile is.  This is a large reptile that generally lives in tropic regions of the world.  There are numerous types of crocodiles and they are extremely fast.  Most of them can travel at close to 70 miles per hour.  They have approximately 68 teeth and their jaws are anywhere from 16-19 feet long.  They are direct descendents of dinosaurs and they are one of the oldest living species known to man.  The crocodile’s diet tends to change as it grows and become larger and stronger. Smaller crocodiles, babies, will usually east small prey and insects.  However, as they grow and become larger they will begin to eat small birds, amphibians and other reptiles.

So what do crocodiles eat when they grow into adults?  Well, their diet will usually consist of fish and other small vertebrates.  They will eat larger animals and such in an attempt to conserve energy.  For the most part, the crocodile will eat just about any animal that comes into close proximity to it.  For example, if a waterbuck were to arrive at the edge of the water in order to get a drink, the crocodile would most likely attack it and eat it.  It is important to keep in mind that a hungry crocodile is not picky.  If a human were to approach the bank of the water where a crocodile was hiding, he or she would also be in danger of begin attacked and eaten.  Large animals known as herbivores are also eaten by crocodiles.  Animals like this include buffalo and giraffes.

Crocodiles will use their tails as a way to gather food.  They will usually use the tail in a manner that gathers fish near their bodies.  Once this is done, the beast will turn its head swiftly and swallow several fish at one time.  These reptiles also work with each other in order to meet their hunger needs and obtain their food.  They will circle fish that are swimming in large schools in an attempt to gather them into one spot.  Once the circle is formed and the fish are together, the most dominant crocodile will begin eating first.

The fact that the crocodile can hide easily in the water gives them the opportunity to attack their prey without being seen.  They are also extremely fast.  This often gives them an advantage over the animals they hunt.  The crocodile will appear to stare at its prey before it attacks.  Actually, they tend to look like they are asleep just before they strike to kill.  Most of the time, they will ambush their prey as they wait quietly and patiently before they make their move.  The crocodile will grab the animal with their large, powerful jaws and trap it.  They will then drag it into the water and hold it under until it drowns.  They then have their feast.  The will bite off large chunks of the prey at a time.  If they are all eating together off of one prey, they will work together again and use each other for leverage.  They will each take an end and twist their bodies in order to tear off pieces of the animal.  This has been called the death roll.  So, are you still asking what do crocodiles eat?  I think it is safe to say that, if they are hungry, they will eat whatever they want and whatever is close!