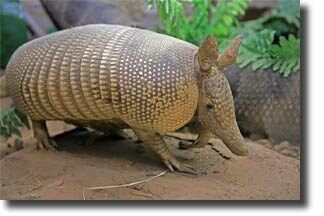 What do armadillos eat anyway? The answer to that depends somewhat on the species we’re talking about. There are 20 or so species, living from Texas down through Mexico and into Central and South America. They have slowly migrated northward, there being few if any observed in the United States before about 1850. Besides taking up residence in Texas since that time, there have been armadillo sightings in Oklahoma and Arkansas. As they prefer a warm climate there is not much chance of them migrating too much further northwards.

Grub Eating Tanks – Getting back to the question of “what do armadillos eat?”, some species have strong teeth and other species have not so strong teeth. The teeth have much to do with the diet of a particular species. Those with soft teeth will tend to eat mainly insects, worms or grubs. Those with stronger teeth have a more varied appetite, including lizards as one example. Armadillos, which means “little armored one” in Spanish, are best known for their armored plating and their somewhat primitive appearance. They are in fact primitive animals, having been around for a long, long time. Their armored covering varies from species to species. Some have 3 plates and can easily role up into an almost impenetrable ball in the presence of a predator.

Run, Burrow, Swim, Or Walk under Water – Those armadillos found in Texas are of the 9 plate species and are not capable of rolling up completely into a ball. If a predator attacks, they will do the best they can however, but their main means of defense is their ability to run surprisingly quickly and the ability to burrow, also very quickly. They can also escape into a nearby pond or stream and literally walk along the bottom to the other side if need be, as they can hold their breath for several minutes. The Texas 9-Banded armadillo can also swim across. The other species can’t swim. A pond or stream is often handy as the habitat preferred by the armadillo is a place close to plentiful water. Living near water puts them in close proximity to many types of insects and small reptiles they can dine upon.

Fire Ants Beware – Armadillos then as a whole have a rather diverse diet, but returning to the question “what do armadillos eat?”, there is one sticky-tongued species of armadillo that subsists almost entirely on ants, and can put away huge quantities at a time, perhaps not rivaling the anteater but probably coming in a not too distant second. The armadillo will gladly feast on fire ants by the way, so can be a welcome guest where fire ants may be a problem. Those that eat mainly insects will forage, usually at night and can cover a fair amount of ground, moving along at about a mile-an-hour, although as mentioned earlier, they are capable of moving much faster should the need arise. Armadillos are not thought of as predators unless you are an insect, worm or grub, but some do feed on bird’s eggs and even small birds, and several species are fond of fruit. Armadillos of course have predators to have to face but in Texas at least their main predator appears to be the automobile. The armadillo may well be the primary species of road kill found in the state. Armadillos usually present no danger to humans. They may or may not bite if picked up, but their powerful digging claws could create a problem if one is not handled correctly.

Armadillos are generally not regarded as pests as far as a home garden is concerned, though at times they may disturb plantings due to their burrowing and tunneling habits. Such disturbances tend to be temporary, as the armadillo is simply looking for food. If on the other hand, they decide to take up residence and establish a network of tunnels and burrows, there may be a problem. If the answer to “what do armadillos eat?” however, is “insect pests in my garden”, they might not be all that bad to have around.