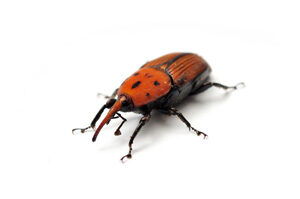 Without a doubt, the most famous of the weevil bugs us the boll weevil, the enemy of anyone in the cotton growing business. The boll weevil, along with a few other members of the bug and insect family has been immortalized in song.

There are a half-dozen other members of the weevil bug family that cause every bit as much of a problem as does the boll weevil and we’ll take a look at a few of them here. Just what distinguishes the weevil from other bugs or insects? The main distinguishing characteristic is the head. Most weevils look like beetles as far as body shape is concerned, but the head is different from that of the beetle in that it is more elongated, and tapers into a definite snout. One of the other characteristics, though not shared by all weevils, is the absence of wings, even though the weevil bug as wing covers.

Aside from their presence in cotton crops, most weevil bug types are found in grains, dry cereals, flour, and among nuts and seeds. Although it is rare to find a weevil in our breakfast cereal, if we purchase the cereal in bulk, or out of a barrel, it could happen. Should you be one of the unfortunate few to find weevil bugs in food items, the only recourse is to throw out all infested food items, and give the kitchen, pantry or storage area, a thorough inspection and cleaning.

Boll Weevils – The boll weevil became famous as the insect that devastated the American cotton industry in the early 20th century. A full scale eradication program, which took many years, finally turned the tide against the weevil, though it will probably always remain a threat. A statue and monument was even dedicated to this insect in Alabama, not because the insect is beloved, it isn’t by any means, but because the problems it caused resulted in a full-scale diversification of agriculture in the southern states, which had become overly dependent on King Cotton.

Flour Weevils – Another or the more commonly seen beetles is the flour weevil, although this is a misnomer, as the flour weevil is not a true weevil at all but a beetle. Still, people who come across this insect insist on calling it a weevil, so it will probably always be known as a flour weevil.

Bean Weevils – Bean weevils, like flour weevils, aren’t true weevil bugs, but are members of the beetle family. They are somewhat teardrop shaped but don’t posses the characteristic weevil snout. As is the case with the flour weevil, people seem to insist on calling this little critter a bean weevil, so it is included in most people’s lists of weevil bugs.

Wheat Weevils – Wheat weevils, the grain weevils touched upon earlier, are true weevils and in many agricultural areas can be a huge problem. Female weevils puncture grain kernels and lay their eggs in the kernel. Once the larvae hatch, whether the grain is still in the field, or worse yet, has been harvested, the larvae usually have an ample food supply. Harvested grain can become badly infested with these weevils. Wheat weevils have wings, but apparently were never taught how to use them, as they cannot fly.

Rose Weevils – Those who grow roses may at one time or another come across rosebuds which have tiny, or not so tiny, holes drilled in them. That is the work of the rose weevil, and while the rosebud may still open, the petals of the flower are apt to be punctured with holes or generally misshapen. The adults puncture the rosebuds and deposit eggs in them, and the larvae then consume the petals, both before and after the flower opens. If there are no petals to feed on, both adults and larvae will eat the tender shoots or stems of the rose plants.

There are other types of weevil bugs as well, including the vine weevils and the white pine weevils, but the ones mentioned above are those responsible for most of the damage done to agricultural crops as well as to home gardens. Unlike the boll weevil, none of the other types are likely to be honored with a statue.