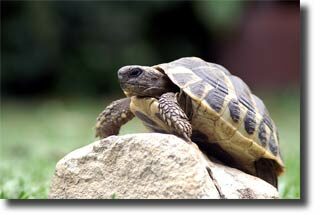 The Many Different Types Of Tortoise

One of the first questions usually asked when describing the different types of tortoise is, what is the difference, if any, between a tortoise, a turtle, and a terrapin? The three look quite a bit alike after all, and a novice would be hard put to tell the difference. We generally think of the turtle as being quite small, living in a swamp, or in an aquarium at home. A tortoise is a turtle-like creature that is generally too big to pick up, and the terrapin has something to do with the University of Maryland!

Just Call It A Chelonian – A definition of tortoises, turtles, and terrapins depends somewhat on where you live. To the British, a turtle lives in the sea, a terrapin lives in fresh or brackish water, and a tortoise lives on the land. To an American, a turtle lives in fresh water, a terrapin in brackish water, some turtles live on land, and some turtles live in the sea. A tortoise is a tortoise. To the Australian, if it swims it’s a turtle, if not, it’s a tortoise. If all of that is a bit confusing, you can use the word chelonian, which encompasses all three types, with each type made of different species.

The Most Well Known Species – Of all of the different types of tortoise, the Galapagos tortoise is probably the most famous. This is the largest living tortoise, and it is believed to have become so due to the fact that in the few million years it has inhabited the Galapagos Islands, it had no predator until humans came along. The Galapagos tortoise can weigh over 600 pounds, and has a life span ranging anywhere from 100 to 150 years. Most tortoises have a life span similar to that of humans, but a few have reached an age of 160 years or more. The Galapagos tortoise was not named after the islands it inhabits. It is the other way around. The Galapagos Islands were named after the carapaces (upper shell) of the species which reminded the Spanish explorers of a type of saddle, a “galapago”.

In all, there are over 70 types of tortoises, of species if you will, plus an even greater number of subspecies. The tortoise is found on every continent with the exception of Antarctica, and sea turtles are found on or near many of the ocean’s islands as well. There are several species which make quite good pets, though it is best if the owner has some experience in handling animals. The larger, or giant tortoises obviously need plenty of room. They need water, but not too swim in. In fact, many species of tortoise are awkward swimmers at best and can easily drown in deep water. A few species can swim well, but still spend most of their time on land.

Species Suitable As Pets – For lovers of giant tortoises, the Brazilian Giant tortoise, also known as the Yellow-foot tortoise, can make a very good pet. Like most tortoises it can be very shy, but also like most tortoises, it is quite intelligent, and soon gets used to the presence of its handler. Brazilian Giants do not reach the size of their Galapagos cousins, but can still grow to slightly over 2 feet long, and weigh up to 100 pounds, though half that size is more typical.

Another very large tortoise favored as a pet is the African Spurred tortoise, which can grow to 30 inches in length and weigh up to 150 pounds. It is so named because of large spurs on its back legs, the purpose of which is not clear. The color of this tortoise can vary from shades of brown, to yellowish-brown, to golden. The temperament of this species makes it a very good pet, in that it is more outgoing than is usually the case with a tortoise, is quite tame, and very strong. As a pet it needs some space and plenty of vegetation to eat.

If you don’t want to build accommodations the size of your living room for a pet tortoise, settle on a Russian, or Afghan tortoise. This is one of the smaller types of tortoise, seldom growing to more than 6″ in length. This tortoise will be happiest in an environment characterized by hot, dry summers, but will spend much of the time in underground burrows. They can also tolerate cold winter weather. As a pet, give it plenty of warmth and dirt to dig in.

Other types of tortoise which are popular as pets are the Leopard tortoise, possibly the most attractive member of the tortoise family, which can weigh 40 to 50 pounds when fully grown,  the somewhat outgoing and inquisitive Red-footed tortoise, which can grow to about a foot in length, and the Greek tortoise, which goes by  a number of different names. The Greek tortoise is very common as a pet, but due to its susceptibility to a number of diseases, it is not a good first pet.

The number of different types or tortoise then, is greater than you may think. They vary from quite small to giant size, and while some can move relatively quickly if they wish, most will motor along at less than a mile an hour. If you had a shell weighing over a hundred pounds, you would probably go at a leisurely pace as well.