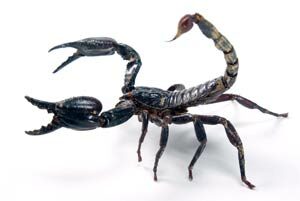 The Different Types of Scorpions

Scorpions come in many colors depending on the type of species. The colors can include red, yellow green or black. They are anthropoids and are in the arachnid family. They are related to the spider species. They resemble a large crawfish and have legs that protrude form the abdomen area. Perhaps their most daunting feature is their long tails. Scorpions use the tails when they are fighting. Not only can they pummel an opponent using their tails but they also pinchers on them that they use to pinch and poison their enemies with. The affects of a scorpion sting can vary. Some scorpion stings cause little damage and after a few hours the sting may not bother the offender anymore. But other types of scorpion’s stings can do a lot of damage. The venom of these types of scorpions mimics that of venomous snakes and cobras.

Emperor or imperial scorpions are the largest types of scorpions. They are black in color and due to the fact that their sting is non toxic, they are the most sought after scorpion house pet. On average their length is approximately 8 inches long and their natural habitat is in Africa. These types of scorpions have a life span of 5 to 8 years. Because of the popularity of the emperor scorpion it is becoming extinct. There are now rules in place to make sure that when these scorpions are transported, they are properly cared for and housed.

Bothriuridae type scorpions are found in Asia and Africa and South America. They like the climate in hot subtropical areas. They are gray or black in color and have a distinctive feature. They are not as thin as other types of scorpions and have a thick heavy looking abdominal area. Their tails also appear thicker then the normal scorpion. These creatures live in small burrows and hide in cracks and crevices. They can also be found hiding under rocks and are considered small. If you are stung by one of these scorpions, chances you won’t even need medical attention.

The Israeli gold or Scorpio maurus can be found in North Africa.  These scorpions are an off white color with red markings the cover the body and tail. They are also known for their huge claws. They are over 8 inches long and are either multi colored or a deep brownish red color. They like to inhabit sand beach areas because of the high humidity levels. They are also scorpions that love to burrow. Their burrows can go under the sand a full foot. Although they like hot sub tropical humid climates they can also thrive in cooler winter weather. They will hide in their burrows and hibernate until the cooler weather has passed. Israeli gold scorpions do not have a fatal bite. It is however very painful and irritating.

Giant hairy scorpions live in the southwest areas of the United States. They like to burrow in sandy areas but are not bothered over a lack of humidity. They thrive in desert areas and are yellow green in color. They are the largest type of scorpion found in America and reach around 6 inches. Their sting does contain a bit of venom but it is usually does not require medical attention.