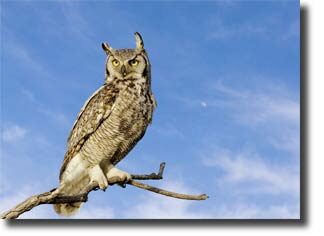 A Guide to Types of Owls

There are over two hundred different types of owls, but all of these fall into one of two families. These are the barn owl family, of which only one owl lives in the United States, and the typical owls, who reside throughout Canada and the United States. Let’s take a look at a few of the types of owls in these families.

The Great Horned Owl is one of the most well-known of the North American owls. They can be found over a huge part of the continent from Alaska south to Mexico. The Great Horned Owl is a large fellow at almost two feet high. With dark brown feathers and a very large white patch on its throat, this owl can often be seen during the day even though he does most of his hunting at night. He is one of the types of owls with ear tufts.

The Screech Owl lives in the same overall territory as the Great Horned Owl. They can be found anywhere from Mexico to the furthest reaches of Canada. Much smaller than the Great Horned, the Screech Owl is only between seven and ten inches tall. He is white underneath with gray or reddish-brown feathers.

The Barred Owl makes his home a little further south than that of the Screech and Great Horned Owl. Although he can be found throughout Canada and the U.S., the Barred Owl also dwells as far south as Central America. He too has grayish and brown feathers, but he gets his name from the bars he has on neck and stomach. He does not have any ear tufts.

You can find the Elf Owl in the Southern United States and Mexico. He loves warm weather and insects, so when winter comes, even those Elf Owls in the southern states head to Mexico for the winter. They are one of very few owls who migrate. With the name of Elf, they are, as you might imagine, quite tiny. In fact, Elf Owls are only five or six inches tall. That means they like smaller prey as well, such as insects, spiders, mice, and lizards. They often live in tree holes that have previously been made by woodpeckers.

The color of Snowy Owls is no secret. Nor is the fact that they live in snowy northern temperatures. They have an extra layer of body fat plus very thick feathers. They can even lower the rate of their metabolism and sleep for over a month if winter food is not plentiful. Snowy Owls are one of the most recognized of all the types of owls. They eat mice and other rodents, helping to keep these populations at manageable levels.