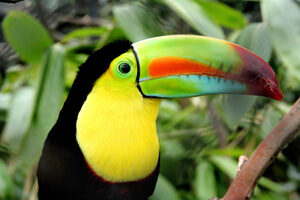 On Toucans and Toucan Habitat

Despite concerns about encroachments into rain forest habitat and the damage this does to indigenous species, toucan habitat has not been damaged to the point where toucans the scientific community considers them endangered (for the most part anyway).  These large-billed colorful birds continue to thrive despite the changes wrought to much of their environment.  They are, in fact, a modern success story.

For most Americans the most famous toucan is Toucan Sam, who they know from eating their Fruit Loops.  Others may actually have come across toucans as pets at friends homes.  For the most part, however, most Americans don’t know much about these birds.

Most Americans don’t know for example that there are over 40 different species of toucan divided into five genera.  These birds are native to South and Central America.  The name Toucan comes from the Tupi language by way of Portuguese—the tribes that speak Tupi (like the Guarani) being indigenous to what is now Brazil.

One of the best ways to understand toucans and learn about toucan habitat is to take an individual case, like that of the small Emerald Toucanet.  The Emerald is a one of the smaller toucans around (thus the “-et” suffix addition).  These birds typically only grow to a foot in length and have a thinner beak than most toucans, though still long.  The fact that it has distinctive regional variations in its appearance in different locations has lead some in the scientific community to suggest that this species is actually better understood as 8 species instead of one.

The Emerald Toucanet makes its home in high mountain woodlands where the back and forth of its distinctive sex differentiated calls are heard from among the cloudy elevations. The secret of toucan success lies in their ability to adapt their behaviors to their distinct habitats.  We see this when it comes to the Emerald Toucan.  Take the Emerald’s calls.  First, there are distinct calls for male and female—no doubt of importance for mating and for caring for the young.  However, the Emerald has other abilities that are distinctly helpful to survival in its toucan habitat.  It has distinct croaking alarms that scientists have noted change slightly depending on the nature of the threat (i.e., whether the threat is coming from the ground below or from the trees).  Furthermore, it also has an aggressive call meant to scare off predators when it is cornered.

The Emerald also has a symbiotic relationship with other inhabitants of its toucan habitat.  For example, when it comes to laying eggs and fledging hatchings, Emeralds are highly dependent on the help of their local woodpecker.  The Emerald uses the holes that woodpeckers make in trees as shelters in which to lay their eggs.  They do not build a nest there, leaving the hole pretty much in the state the woodpecker does (though sometimes the woodpecker will have used the hole as a nest and have left some of his “furnishings” behind).  The Emerald lays about three to four eggs in the hole and then it takes about two weeks before they hatch with both father and mother Emerald incubating them in the mean time.

The dull-coated chicks hang out in the woodpecker nest for about a month and a half, until they are ready to go out on their own.  What makes this possible is that the chicks have special adaptations-an extra layer of insulation on their feet—that allows them to stand in the uncomfortably hard surface of the hole without hurting themselves as other birds might.

These are just some of the ways that toucans are particularly well adapted to their habitats, but like the Emerald, the other species of toucan also have a number of ways in which they used their special skills to thrive in their home territory.