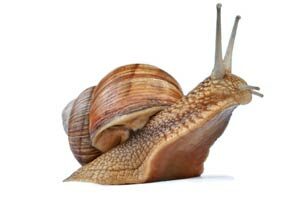 Snail eggs are something you don’t’ normally want to see in your garden, but may be happy do see if you have a water garden or pond. If you have an aquarium, snail eggs may or may not be welcome, depending upon the species of snail involved.

Snails are found in saltwater, freshwater, and on land. The majority of snails, and snail species, are of the marine variety. Some are herbivorous; perfectly at home if there are a few plants or algae in the vicinity, others are omnivores and are useful as scavengers. A few species of snails fit in the carnivore class and are predatory. Snails vary greatly in size, from very tiny ones we view in home aquariums or saltwater pools, to giant land snails found in Africa, and a saltwater snail found in Australia that can weigh as much as 40 pounds. The largest freshwater snail we generally will see is the Apple snail, sometimes called the Mystery snail, often a resident in ponds and aquariums.

Land Snails – Land snail eggs tend to look like little white or yellowish balls, 3 to 5 millimeters in diameter. These eggs are usually buried in the ground, so remain out of sight until the young snails hatch. Garden snail eggs will sometimes be discovered under a pot where the soil remains fairly damp, a necessary condition for the eggs to survive. In general, if snails (or slugs, which are also snails but without the shell) are a pest in your garden, you’ll want to get rid of any snail eggs you come across.

Water Snails – Snails can be beneficial in ponds and aquariums as they act as the street sweepers of the community. They are not particularly beneficial in aquariums containing plant life however, as they will feast on the plants as well as any algae or fish waste they may encounter. While land snails are hermaphrodites, which is to say both sexes contained in the same shell, many freshwater snails, such as the popular Apple snail, are separately sexed and you need one of each sex to have baby snails. If you do get two sexes you will find that they can put rabbits to shame as far as breeding is concerned. This may or may not be a welcome situation.

Snail Infestations – Snail infestations can be common in aquariums when the snail eggs are accidentally introduced into the environment. This can happen by placing anything from a plant to gravel from another source into the aquarium, and the object in question has a collection of snail eggs attached. Some freshwater snails lay their eggs under the surface and the eggs are attached with an adhesive-like substance to whatever object is handy. You might glance at your aquarium one day and see a few hundred little snails that didn’t seem to be there a few days back. They were, but as snail eggs. A snail infestation can be very difficult to eradicate, and for a smaller aquarium the best approach may just be to start fresh, with all the objects in the aquarium being either replaced (plants) or cleansed (gravel).

The Apple Snail – Other snail eggs are more welcome, those of the Apple snail for example. Apple snail breeding is often encouraged (you need a male and a female), and the eggs are often incubated (if necessary) and the offspring looked after by the aquarium owner. Apple snails, and a few other freshwater types, do not lay their eggs underwater, but just above the water line. The female will climb the side of the tank to lay her eggs, and even fall out of the tank if there is no lid. You’ll find a cluster, or clutch, of eggs on the inside of the tank above the waterline, or sometimes under the lid.

Snail eggs therefore can be welcome or very unwelcome, depending upon the type of snail, and where and under what circumstances you find them. Apple snail eggs, in a small pond or larger aquarium can be kept under control in terms of numbers of snails you wish to see hatched. Other snail species can, over a short period, overwhelm an aquarium. And if you find a clutch of snail eggs in or near your vegetable garden, get rid of them.