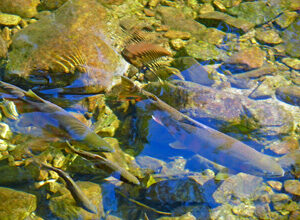 Long Journeys – Salmon migration is truly an amazing thing to behold. Imagine if you were born in a shallow stream, some mile inland from the ocean, made your way to the mouth of the river and to the ocean in company with a large number of other young fish, called smolts at this stage, and then spent several years traveling around in the Ocean. Your travels may take you up and down the western coast of the United States, Canada and Alaska, and into the Gulf of Alaska and the Bering Sea if you are a Pacific salmon, or thorough the waters of the North Atlantic, from New England, to Greenland, Iceland, and on to the British Isles and the North Sea and Scandinavia if you are an Atlantic salmon.

A salmon migration may involve a few hundred miles for some species and thousands of miles for others. One of the things you would have to do early on as a young salmon, in fact a baby salmon, would make the transition from freshwater to salt water Not all fish can do this, as most can only survive in one type of water or the other. As a salmon however, you’re happy in either environment although you’ll spend most of your life in salt water.

As a mature salmon living in the ocean, you’ll grow quite large, just how large depending upon your species. If you are a Chinook salmon, also called a King Salmon, you may well grow to weigh over 50 pounds. Some King salmon have grown to weigh over 100 pounds. This takes a few years, and it might seem like a pretty good life, although there are predators out there, like killer whales and sharks, that wouldn’t think twice about taking on a 50 pound salmon.

After a few years in the ocean, where salmon migration seems to be a distant memory, you’ll get a sudden urge to return home. One of the truly amazing things about salmon migration is you’ll know how to return to your home, even though you were only a tiny smolt when you left it.

You may have spent most of your life hundreds of miles from the mouth of the river or stream you first entered the ocean from, but somehow you know how to get back there. Whether you realize it or not, you’re going back there to either lay eggs if you’re a female, or fertilize them if you’re a male, and in both cases die shortly thereafter.

Not only in taking part in the salmon migration do you find the right river or stream, you will probably head for the same gravel bank or stream bed that was the exact place you hatched from an egg.

Going Home Is Harder – When you were small, getting to the ocean was fairly easy, as you just had to go with the flow. The river current carried you along, and it was downhill all the way. One your way home, as a big fish, you may need all the energy you can muster, as you will not only have to be traveling upstream much of the way, but you will have such things as rapids and dams (hopefully with fish ladders) to deal with. In addition, you’ll be making a transition from living in saltwater to living in freshwater, only in this case I will only be for a short time.

Migrations are always a subject of fascination. Some, such as the migrations of Monarch butterflies and waterfowl, are easily observable, and some people make a habit of following these migrations from start to finish. As far as salmon migration is concerned, we can observe the start and the finish but don’t see much of what is happening in the middle.