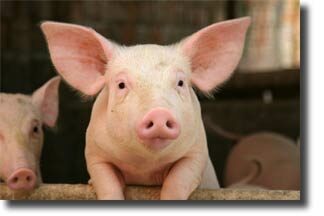 Are Pocket Pigs For Real?

Pocket pigs appear to be gaining in popularity as pets. They are however relatively scarce and relatively expensive. There’s no doubt that owning one or more of these creatures is one of the latest fads. The question is, is the pocket pig a scam?

The Internet has many advertisements for miniature animals of all types, often advertised as pocket animals or “teacup” animals. There is no shortage of miniature horses and a number of miniature dogs, many of which are cross breeds. Some of the claims given as to the size of an adult animal are legitimate, others are not, and it’s no different as far as pocket pigs are concerned.

Pocket, Or Miniature? – Part of the problem is one of terminology, which can be misleading, and is sometimes designed to be just that. There are miniature pigs. The Vietnamese pot bellied pig is a miniature pig, but this “miniature” can weigh over one hundred pounds when fully grown, as compared to a farm hog which can weigh many times that. There are some breeders who have been able to develop miniature pot bellied pigs that grow to no more than 30 to 50 pounds, which is really quite small for a pig. The teacup or pocket pigs that are advertised will probably not stay that way for long. While as newborn piglets they may indeed fit into your pocket, or can have their picture taken standing next to a teacup, there is no guarantee as to how big your pet is going to be a year later. One can keep a small pig small by underfeeding it, but what results from that practice is a small but not healthy pig, which may have a much shorter than normal life span.

It Started In The UK – There are some truly small pigs which have been bred in the United Kingdom, and appear to fit well into the miniature category. Even though there may be between 10 and 30 piglets in a litter, 10 being more typical, these little ones are in short supply and will be quite expensive. Also, shipping one or more overseas may present some difficulties, not to mention the added expense. These pigs are hybrids, which have the Kune Kune breed in their bloodlines. This breed is itself very rare. They will indeed fit into the pocket when very young, but when fully grown will approach half the size of other breeds. Still, they are small enough to be house pets.

A Bit Pricey – If you’re looking for miniatures in the United States, there are several breeders of pot bellied pigs who specialize in breeding miniature pigs. For the most part, these are ethical businesses who making no claims to be breeding pocket pigs, but do claim to breed miniatures which will make nice pets. These miniature pigs are usually priced in a range between $600 and $1,200, with some colors being more expensive than others, and female piglets usually costing about 10% more than male piglets. The least expensive piglet is generally the black male, as black is the most common color. Spotted or “dalmatian” piglets often command the highest prices.

If you have your heart set on one of these miniatures, and can afford it, you can end up with a very fine pet. Pigs are among the cleanest of animals. Give them clean quarters, and they’ll keep it that way. They roll in the mud to cool down, not because they enjoy being dirty. In addition, pigs are among the most intelligent of animals, and can outperform dogs when it comes to doing tricks. Not all breeds of pigs grow up to be friendly companions, but the Vietnamese pot bellies definitely do, as will the miniature varieties.  Just remember, if you purchase one and carry it home in your pocket, it’s not going to stay that small.