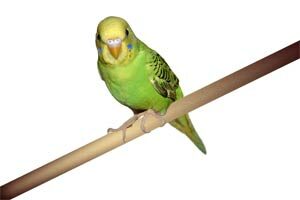 The wide range of parakeet behavior characteristics will come as quite a surprise to someone who has never owned one of these birds. Parakeets do much more than fly, sit on perches, and say a few words (when trained to do so). In their everyday life, parakeets go through all sorts of routines, many of which can be downright comical to observe.

There are approximately 120 species of parakeets in the world. A majority of them, at least as far as pet parakeets are concerned, come from Australia. The parakeet is a small parrot, usually very colorful as parrots often are. What makes parakeet behavior rather special is the fact that they are extremely social birds, towards each other and towards humans as well. A very young parakeet will normally take to handling by a human quite readily. A grown wild parakeet may not, or may take some time in becoming accustomed to a human. However, once a bond is established between human and bird, it is usually permanent.

Being both social birds and flock birds, abnormal parakeet behavior may result if a bird is kept in isolation. A parakeet can become bored or lonely, and if this is the case it can be difficult to keep or handle. It is best to have two parakeets if you want these birds as pets, but a single bird can be very happy and contented if given adequate attention. Giving a parakeet adequate attention isn’t all that difficult to do once you start taking a close look at the creature, and some of its behavior patterns.

If you have a male and female parakeet they will in all likelihood soon bond, and become practically insuperable. If you have a number of parakeets, males and females will pair up and generally stick together. A single parakeet will bond with you if you let it, and become a constant companion. Parakeets, primarily male parakeets, love to sing. They will do better if they have other parakeets to learn from, but most will create individual songs of their own, including tunes, squeaks, croaks, with sometime a word or two thrown in. Head bobbing often accompanies the singing, suggesting the bird is really enjoying itself.

A rather peculiar example of parakeet behavior and another sign of enjoyment, or at least contentment, is beak grinding. You may think beak grinding signifies something is wrong with your parakeet, but this isn’t the case. Parakeets often grind their beaks when drifting off to sleep. Speaking of sleep, a parakeet doesn’t sleep only at night, but normally will take one or more naps during the day. A nap can be of short duration, perhaps 15 minutes, or may last as long as an hour. A nap is often preceded by a good yawn. Whether all birds yawn or not probably isn’t known, but parakeets definitely do, and fairly often at that. It isn’t unusual to see your parakeet going through a ritual of exercises when awakening in the morning or from a nap. Parakeets often go through a stretching routine, extending opposite wing and leg, followed by a vigorous flapping of their wings, probably to get the blood flowing.

In the wild, parakeets tear up things like plants, or any small object that can be destroyed. They do this to keep their beaks in shape. A captive bird will still instinctively want to exhibit this behavior. Place a toy or some other object in its cage that it can spend time tearing apart and you’ll have a much happier bird. If you don’t, it may go to work on something you don’t want torn apart. When these birds exhibit certain behaviors, it’s usually with a purpose in mind, something they would do naturally in the wild.

Like any animal, some parakeets make very good pets while others do not. It’s safe to say that most of them make good pets, and take well to training. When they do require discipline, the best approach is to simply ignore them for awhile. A social bird like the parakeet does not like to be ignored, and when that happens, it may eventually get the message and adjust its behavior accordingly. For the most part though, your experience with observing parakeet behavior will be very positive.