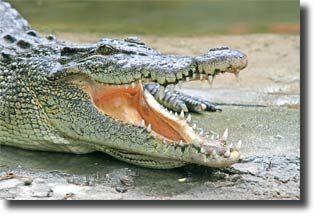 The Largest Alligator Ever Recorded

Alligators And Crocodiles Are Not One And The Same – There are crocodiles found in the southern Florida as well, and at times, reports of  large alligators and large crocodiles become intertwined and one is never quite certain which animal is the subject of the discussion. Alligators can become quite large, averaging around 13 feet in length and often weighing over 1,000 pounds. Crocodiles are generally somewhat larger on the average, reaching 16 feet, with one monster saltwater crocodile, shot in Australia, measuring a whopping 28 feet in length and weighing nearly 3,000 pounds.

The Largest Alligator – The largest alligator ever recorded was one from Florida which measured 17 feet 5 inches. A 17 footer was also reported in Texas, though this finding was never made official. The Texas alligator was apparently one held in captivity by “a friend of a friend” and may or may not have been the largest Texas gator ever. Other southern states, specifically Georgia, Mississippi, Alabama, Oklahoma, and the Carolinas have alligator populations, but the bulk of the population, including the larger gators, will be found in Florida and Louisiana.

Unlike crocodiles, which can be quite aggressive and hence are regarded as being very dangerous creatures, alligators will for the most part not attack humans, but tend to shy away. Even if you came close to the largest alligator, it may simply head off in another direction. A certain percentage would not however, so getting too close is not a good idea. Though alligators can not run very fast, they can move very quickly over a short distance. When alligators do kill humans, the victims are usually in the water, snorkeling, swimming, or simply wading. Only in a few instances has an alligator attacked a human on dry land and then dragged that person into the water. Most of the alligators who have killed people are in the 11 to 12 foot range, though a few smaller ones have caused fatalities.

Don’t Forget Wally Gator – The largest alligator you will likely ever see will be found among those DVDs featuring alligator themed movies. Of course small alligators would never do for a horror picture, so the gators in these movies tend to be big brutes. In the movie Alligator, a giant gator emerges from the sewers of Chicago, terrifying the populace and doing bad things. The move was scary enough to warrant a sequel, Alligator 2 -The Mutation. Many people insist that the best of the alligator movies was Lake Placid. This movie also had a sequel.  Of course there is the lighter side as well. There is the alligator in Peter Pan, and cartoon characters Wally Gator and Al the Gator are not at all frightening.

A 200 Footer! – People in Titusville, Florida claim to have the largest alligator in existence. In one sense they are right. “Swampy”, a long boxy alligator, greets visitors to a roadside attraction outside the town. Swampy is 200 feet long, and if you get caught in a downpour you and your friends can seek shelter in Swampy’s mouth, which is perpetually open.

The name alligator comes from the Spanish el lagarto, which translates as “the lizard”. Where crocodile comes from isn’t clear, though some believe the Greeks had a hand in naming it.