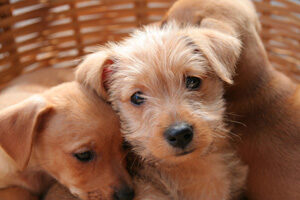 A Genuine Labrador Terrier Can Be Hard To Come By

There are many popular cross breeds, hybrids, and designer dogs, but the Labrador Terrier does not appear to be one of them. Just why this is the case isn’t certain. Both the Labrador retriever and many of the terrier breeds are fine animals, and one would thing that there might be more attempts to get an even better animal by crossing these breeds.

Strange Mixes, Strange Names – If you want to locate a Labrador terrier mix, your best bet would be the United Kingdom, where a few such hybrid breeds are to be found, and a few processional breeders as well. Among the breeds you’ll find are the Pit Bull Lab mix (called the Pitador, which sounds like someone involved in bull fighting), and the Staffordshire Bull Terrier Lab mix (Staffador?). About the only Labrador terrier mix you’re apt to come across on this side of the Atlantic is the Boston Terrier Labrador, and there does not appear to be many of those.

What traits a Labrador terrier mix is difficult to discern, if only because there are a number of different terrier breeds. The Labrador retriever of course is an excellent hunting dog, as are some terriers, but is generally much more laid back and less hyper or aggressive than is your typical terrier. If you really are interested in the mix, contact a breeder on the Internet, through a dog magazine or at a dog show. The breeder should be able to give you the details on what you can expect in the way of appearance, size, conformation, and temperament, as well as health issues of the particular mix he or she is breeding.

Examine The Family Tree – As with any hybrid canine mix, if you have definite expectations in mind as to what the characteristics of the dog should be, the breeder must be able to verify that the parents of the mixed breed are both purebreds if the Labrador-Terrier is first generation. If second generation or beyond, it is helpful to know if both parents are Labrador-Terriers, or if one was a Labrador or a Terrier, and the other the mixed breed. In other words, find out the family tree of the puppy you are considering purchasing. The more that is known about the lineage of an animal, the lesser the chances of it exhibiting an undesirable trait. Of course, in the world of genetics, nothing is 100% guaranteed.

A reputable breeder will of course want to keep his or her reputation intact, and should not hesitate to offer all the information they have about the puppy you are looking at. If the breeder seems unwilling to do this, look to another breeder. If you are dealing with a puppy mill, it’s highly unlikely they will be able to produce genuine documentation proving the quality of a given puppy’s bloodlines. Chances are, a Labrador-terrier mix is going to be expensive, simply because there are not too many around. Of course the price you’ll pay depends upon demand as well.