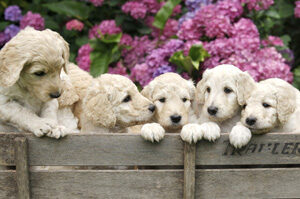 A Quick Guide to Labradoodle Grooming

If you don’t know much about labradoodle grooming, the prospect can be a little unnerving. It is best to learn the breed’s coat and its grooming requirements before attempting to groom the dog yourself. This will save you a great deal of time and effort as well as prevent your dog from having to sport an inappropriate ‘do!

The labradoodle’s coat generally comes in three different styles: flat, fleece, and wooly. The flat coat consists of more or less straight fur that is often thick. Although the typical poodle’s coat is considered to be non-shedding, this type of coat takes on more characteristics from the labrador’s fur and does shed. It is quite fuzzy in appearance and is typically soft to the touch. Part of the maintenance involved in this type of coat includes vacuuming and hair removal from furniture. The fleece coat type is wavy in texture and is often thick yet still capable of being brushed. This type of coat is considered to be good for people who suffer from pet dander and allergies because it sheds very little. The wool type of coat is also known as the “curly coat” because it does appear to have curls throughout the fur. This is the typical poodle style and does not shed. It is extremely allergy friendly.

Bear in mind that these are only the three most popular types of labradoodle fur. With this breed, it is possible that your dog could end up with a mixture of hair types or a variance in the extremity, such as very tight or loose wool coat or a mixture between flat and wavy.  The care for these in-between coats can be a little different.

The type of grooming your dog’s coat requires really depends upon the type of coat he has, although grooming is not necessary until the labradoodle gets its adult coat around eight months of age. A labradoodle with a flat coat will need to be brushed with a mat comb and a b bristle brush every month to avoid matting. Matting is when the fur clumps together and forms knots. Once the fur has become matted it can be nearly impossible to brush through without causing your dog pain. Severe matting may even have to be cut away. Straight or slightly wavy fur usually does not require clipping save for the odd trim every few months or so, particularly around the eyes and ears.

Fleece coated labradoodle grooming requires a little more work than the flat variety. Because of the wavy and thick texture of this coat, it is as a particular risk for matting and should be brushed thoroughly every month. If the dog spends a lot of time outdoors, it may be necessary to brush his fur every two weeks or so. This fur also requires the use of a mat comb and a bristle brush. This style of fur should only need to be trimmed once or twice a year overall, save for the odd trimming around the eyes, ear, and the “beard” area.

The wool coat is at the highest risk of matting and should be brushed thoroughly every week. A natural bristle brush should be used to reach the undercoat of the fur. Many find that brushing the hair in sections allows the groomer to reach the hair all the way at the skin, where matting is most likely to occur. As this type of fur is often very curly, many owners find it easier to keep the hair clipped very short, which makes brush time much easier. To keep a labradoodle’s wooly coat trimmed short, it will need to be clipped about four times a year.

As for bathing, labradoodles should only be bathed once or twice a year. This breed’s coat—regardless of the texture—is naturally clean and most dirt can be filtered out through regular brushing. Giving baths too frequently could result in dry or irritated skin for your pooch. Just remember to brush your dog regularly and trim his fur as needed and you will find that labradoodle grooming is a cinch!