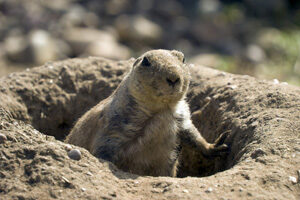 There are basically two types of groundhog traps, live traps and kill traps, and the type you want may depend upon the extent of your problem. Groundhogs are also known as woodchucks in some parts of the country, so if you see an advertisement for woodchuck traps, they’re no different than groundhog traps.

A Large Rodent – It might help to know a little about groundhogs so you know what you’re dealing with if you feel the need to trap them. Groundhogs are not to be confused with ground squirrels, gophers, or prairie dogs. Groundhogs are much larger, often weighing as much as 10 pounds, so gopher traps won’t work. The live capture types would be too small, and the kill types, though possibly causing injury to a groundhog, are normally not large or strong enough to kill one.

Groundhogs are not found in large colonies as is the case with gophers and prairie dogs. If you live on an acre of land, you might have a groundhog or two in residence, and if you have 40 acres you might, if you’re particularly unlucky, have a 3 or 4 dozen groundhogs around, assuming the food supply will support the population.

The Use Of Live Traps – Unless the groundhogs are wreaking pure havoc in your field, your garden, or under you house, you may opt to use live traps. Live groundhog traps are simply cages containing bait, and a door that will allow the groundhog to enter but not allow it to leave. These are of course very humane traps as long as they are monitored often enough so a trapped groundhog would not be in danger of starving to death or dying from lack of water. By using live groundhog traps, the chubby little fellows can be transported to some distant location, usually a place where it can do no harm, and released. Unless the groundhog is eating away at your vegetable plants, or burrowing under the foundation of your house, it is for the most part a harmless creature, one that is willing to live and let live.

A groundhog tunnel can be up to 30 feet long and contain numerous passageways and chambers. The groundhog usually keeps its tunnels meticulously clean. Sanitation is not a problem, but holes in the ground’s surface from instability or cave ins sometimes can be. A groundhog’s tunnel system will have at least two entrances, and at times more. One of these entrances will tend to be the “front door”; the entrance the groundhog uses the majority of the time. If this entrance can be located, it would be the optimum place to put a baited live trap. Of course one could put a live trap by each entrance that has been discovered, under the theory the animal has to come out somewhere, sometime.

The Use Of Kill Traps – Kill traps are somewhat similar to very large mousetraps or the spring traps used to ensnare large animals. They are designed to kill humanely; in fact those that are large enough to trap a groundhog can have a spring that is so strong it’s difficult to impossible to set by hand. Inexperienced trappers should use a special trap setting device to avoid a crushed hand or forearm, and these kill traps can be dangerous to use if pets or small children are apt to be in the vicinity.

Other alternatives include poison baits and the injecting gas or toxic fumes into the groundhog’s tunnel system. While most of us would rather leave these creatures in peace, situations do arise where getting rid of them is the only real option, and the decision then boils down to whether to use a live trap or a kill trap.