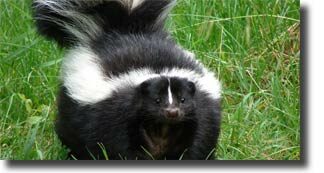 Tips for Getting Rid of Skunks

Getting rid of skunks can be a very frustrating proposition. If you have ever had to deal with a population of skunks around your home, then you know how annoying the problem can be. When you try to encourage a skunk to leave the area, you always have to deal with the very unpleasant possibility of being sprayed.

Of course, doing nothing could mean other problems around your home that could include your pets being sprayed or just having to deal with the odor that may linger around your property from the skunk spraying on a daily basis, as has been known to happen with some particularly troublesome skunks.

While there are many products available that promise to be effective in getting rid of skunks, there are doubts as to the effectiveness of such products. One such item is a spray containing the urine of other animals, such as coyotes.

While it may seem to make sense in theory, the fact is that most people who tried using such sprays to drive skunks away were disappointed with the results.   There is just no good evidence that the smell of urine will deter a skunk.

Another product that promises to repel skunks is the use of ultrasonic signals. Again, the majority of people who spent the money to buy such a device ended up being disappointed with the results.  Some experts say there is only one way to get rid of skunks. The most effective method, say these experts, is to trap and relocate the animals.

While some may enjoy taking on the challenge of doing the job themselves, most people would rather turn to a professional.  Not everyone who traps skunks will do so the same way or with the same final outcome.

For some people, the humane treatment of the skunk is of the utmost concern. For those people, calling the local animal control center is not the best choice. Many such organizations will not even help if the problem is on private land. The ones that will often will kill the animal or animals upon capture.

The same is true of some who have trapping businesses. If the humane treatment of the animal is a concern to you, then it is important that you discuss this with the person that you are hiring. It is not a bad idea to get in writing how the trapping will be handled and what will become of the animals or animals once they are trapped.

The trappers who handle the task in a humane way will typically trap the animal and then relocate it to a remote location. Obviously, getting rid of skunks in this manner will take a bit of extra effort on the part of the trapper. It will also take a bit of extra effort on your part to locate a company that will handle the matter in such a humane way.

Getting rid of skunks really is a task best left in the hands of professionals. While you could try some of the products that promise to rid your yard of skunks, you will more than likely end up being disappointed with the effectiveness of such products.

It’s better to just start by calling a professional. You will save both time and money, and will be able to begin the process of effectively getting rid of skunks that much sooner.