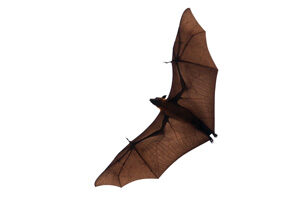 One of the most unique and fascinating creatures that inhabit the islands of Madagascar is the Madagascan flying fox bat.  The majority of these social and inquisitive large fruit bats live in the coastal rainforest areas of the East and West Madagascar where they roost in native forest trees and mangroves. However, scattered colonies occasionally are found in the more dry forest areas.

Flying fox bats are named for their unique resemblance to the fox family. They have prominent features that make them stand apart from other more common bats, including a small fox like face with a pointed snout and dog or fox like ears that stand up from the top of their heads. Their eyes are large and round, allowing them excellent vision and a high range of color recognition, both in daylight and at night. Unlike other bats that use echo navigation to distinguish the location of food, flying fox bats can see well in both day and night and use their eyesight to hunt and navigate while flying. Like other bats, flying fox bats are nocturnal, preferring to sleep by day and hunt and socialize at night.

Typically, a flying fox bat will have dark brown fur with reddish brown or gold color, similar to that of a red fox, on the shoulders and chest. The wings are most commonly black or dark brown. These large bats have been known to grow to nearly a foot tall, and have up to a four-foot wingspan. They are the largest bats found in Madagascar.

The Madagascan flying fox bat is a very social animal. They are most commonly found roosting by day in large camps that can consist of a thousand or more individual bats. At night, the camp breaks up into small groups or individuals to hunt for food, which consists of nectar, fruit and blossoms. A scout usually flies ahead of the others, searching for a suitable food source.

These bats are very noisy animals, and communicate by vocalization. Distinct sounds are used to call the young back to the camp, to assert dominance and to attract mates. These sounds range from whining to honking to communicate within the camp and they intensify in volume if any member of the colony spots a predator.

Mating of the flying fox bat takes place while the bats are suspended upside down. The breeding period is most commonly April and May, with gestation lasting approximately six months. The majority of mothers will give birth to a single infant, but twins have been found on occasion.

Madagascan flying fox bats have been declining in numbers, largely due to the destruction of their natural habit. Hunting has also proven to be a significant problem, as the local government does not protect this species. Hunting season is open from May and September each year, but enforcement of the season has proven to be difficult, resulting in yearlong losses of the population.

Farmers in the region consider the Madagascan flying fox bat an agricultural pest. The primary exported crop of this area are lychees, which flying fox bats devour from the fields. Flying fox bats were added to the IUCN Red List of Threatened Species of 2004, but it has done little in the way of protecting this species. It is estimated that only 300,000 remain in their natural habitat.

Luckily, the local government has areas listed as sacred forests, typically around cemeteries and other locations of spiritual concern. The flying fox bat cannot be hunted in these areas, ensuring a safe zone for maintaining the species in a limited range.