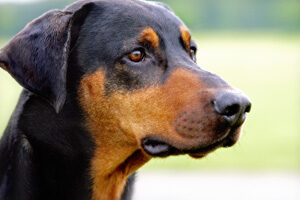 A Fawn Doberman May Require Some Special Care

A Fawn Doberman Pinscher is simply a Doberman having a special color which can require some special attention. In the Doberman world, there are only four recognized colors as far as the American Kennel Club’s recognition of a breed champion is concerned. These colors are Black and Rust, Red and Rust, Blue and Rust, and Fawn and Rust. The Fawn and Rust Doberman is simply called a Fawn Doberman. There are thousands of Dobermans, but usually only a few hundred having the correct colors to be considered best of breed in an AKC sanctioned show.

A Lesson In Genetics – Black and Rust and Red and Rust Dobermans far outnumber the Blue and Rust and Fawn and Rust dogs, which are known as “dilutes’ in terms of their coloring. Fawn is a dilute of Red, while Blue is a dilute of Black. A Doberman can carry a dominant color gene only, which as Black, or a dominant gene and a recessive Red gene, or the recessive Red gene only. Some dogs also carry a dilution gene. For a puppy to be either a Blue Doberman or a Fawn Doberman, both parents must carry a dilution gene, and whether the puppy is Blue or Fawn depends upon the dominant and recessive genes carried by the parents. To make a long story short, since all Dobermans do not carry a dilution gene, and it takes two to tango, the Blue and Fawn Dobermans are always significantly fewer in number than are Dobermans having the other two standard colors.

Diseases Of the Doberman – Like any other breed, the Doberman has its own set of diseases and problems. One of these is a bleeding disorder called Willebrand’s disease. Though not all Dobermans affected with the disease have a serious problem, some do. However it can be tested for in a young dog, and treated before causing problems at a later stage in the dog’s development. Some Dobermans can have a serious heart disorder, dilated cardiomyopathy, which appears to be a genetic disease and is best avoided by not breeding dogs that are affected or may test as carriers. One other condition, more prevalent in Dobermans than in other breeds is hypothyroidism, a condition that, while somewhat common, is normally quite easy to treat.

Skin Problems More Common – As far as the Blue Doberman and Fawn Doberman are concerned, both tend to have a higher incidence of skin problems than do the other colored Dobermans, and other breeds for that matter. One such disorder, known as Color Dilution Alopecia (CDA), affects the hair follicles of the dog causing a loss of hair, at times evident as patchy balding, and usually first noticed along the dog’s flanks. In severe cases, a Fawn Doberman can lose all of its hair, though this is not very common. Most often, the coat becomes thin along the dogs back and on its flanks, but the hair does not all fall out. The condition does not cause any ill effects or discomfort to the dog however. The end result is simply a healthy dog who happens to have a thin coat in places.

Another Cause Of Hair Loss – The hair loss can also be attributed to hypothyroidism, so when first noticed, the dog should be tested for a possible thyroid problem. While the hair loss itself is not serious, though certainly not desirable, a thyroid problem could be quite serious. If the Fawn Doberman starts loosing hair, it should not be assumed that CDA is the sole reason.

In spite of these problems, the Fawn Doberman makes a wonderful pet. Some fear the Doberman, due to its reputation as a guard dog or security dog. Its temperament is such that it should never be taught to attack. It is a very intelligent and highly trainable dog, and is in fact a “people” dog, enjoying the company of people, and thus making a fine family pet.