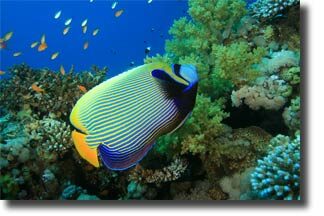 A Quick Guide to the Emperor Angelfish

The pomacanthus imperator, or emperor angelfish, is of the salt water variety and a favorite amongst angelfish hobbyists. Known for their brilliant blue and yellow stripes, as well as size (up to 15” in length), 70 species of this reef-associated fish inhabit the warmer waters of the Pacific and Indian Oceans.

Resembling the butterfly fish, adult emperor angelfish have a roundish profile and flattened bodies, with a white snout, purple-black mask around the eyes, and a yellow tailfin.

Some interesting facts about this species of angelfish:

If you are interested in owning and raising emperor angelfish, there are several things to take into consideration.

Cost. Emperor angelfish are among the more expensive species to buy. Prices for juveniles start around $60, adults $200 or higher, with show-quality emperors approaching $400. And if they aren’t available in your area, you’ll need to have them shipped.

Tank size. Though raised-in-captivity emperors don’t usually reach the 15” size of their native counterparts, domestics can approach 13”. Emperor angelfish need room to turn around and navigate through the landscape. As such, most experts recommend a 150-200 gallon tank for starters, even larger if possible.

Provide enough room for a tank this size (as well as the other accessories) – and remember:

Expectations. Though raising these beautiful fish in captivity can be highly rewarding, there are compromises involved. Due to the difficulty of simulating the ocean environment (with sponges and large rocks.), emperors may lack certain things of a dietary nature that will eventually affect their development. As such:

Once you have decided to take the leap and purchase one of these beautiful fish, make sure all the necessary preparations have been made.

Have a quarantine tank ready and filled with the necessary (and dissolved) medications and chemicals. Water temperature should be between 72-80° F, and the ph level 8.1- 8.4. As these fish are prone to common parasites, they should remain in the quarantine tank for 2-4 weeks.

As the time for transition to the larger tank approaches, make sure all the accessories are in place:

In addition, include live rock, sponges (if you can find them), and seaweed (attached to the inside surface of the aquarium). Coral should be avoided, as emperor angelfish will devour it in short order.

Foods should include raw and mysis shrimp, krill, nori, marine algae, and prepared pellets or flakes which contain a good balance if vitamins and nutrients.