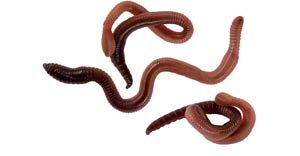 Though millions of people do not realize it the earthworm is of great importance in ensuring that life makes its necessary cycle and is an influential part in the ecosystem; thus the earthworm farmer. Rarely straying far from home these wigglers spend their life eating through any waste they come in contact with. This waste material is passed through their intestines and deposited back in the soil behind them leaving some of the richest, life-sustaining humus known to mankind. Thus, not only are the earthworms themselves marketable, but the compost/humus (fertilizer made by natural means) produced as well.

Aristotle (384-322BC) referred to the earthworm as the intestines of the earth.  Charles Darwin (1809-1882) believed every inch of topsoil on the entire planet had surely passed through the belly of earthworms (studied them during an illness in 1837). Robert Rodale, (1930-1990) organic farming expert, believed worms, by eating their way through earths billions of pounds of garbage could help right the world’s waste management crisis.

Earthworm farmers raise these cold blooded guys for personal use, or commercially for bait (ask the 26 million American fishermen), for nurserymen, as supplement food for zoos and for organic farmers who know the fertilizer produced by worms is three times as rich as the main ingredients of man-made fertilizers-nitrates, potash, and phosphates.

Food for earthworms is the least of the earthworm farmers’ worries as they are natural predators of microscopic organisms. Having no teeth, nor digestive enzymes to digest foodstuff on their own they rely on algae, bacteria, fungi, and protozoa in the soil/leaves that has begun to rot and soften to aid them in their quest to eat and digest food.

In other words, anything that rots-vegetable scraps, egg shells, clippings from your yard and trees, cardboard/paper, as well as leftover bread/grains or pasta are all primary source of nutrition for earthworms.  Though worms can digest animal/dairy products, these can cause unpleasant odors and/or attract flies; be aware. Consider a weekly handful of ground cornmeal for added nutrients and to ensure good reproduction.

Earthworm farmers use anything from lumber to concrete to construct beds. Ingenious ones have been known to resort to the free stuff-half barrels, discarded refrigerators or washing machine tubs, old livestock water troughs, or any other large wooden or metal container they can get their hands on. All they need is drainage holes in the bottom.

The most convenient dimensions for earthworm beds is 3 X 8 feet which makes chores such as cleaning, dividing, feeding or harvesting easier. Bed depth should be 12 to 24 inches. If freezing or extremely hot temperatures are common in your area, seriously consider burying beds 12-24 inches below ground where the temperatures are constant.

Leave several feet between beds for convenience. Earthworm beds and/or shelter should parallel prevailing winds your area is prone to.  Turning the contents of the beds once a week helps to keep it aerated (also makes it possible to check on them-condition, population, growth, etc.).

Earthworm farmers quickly learn worms are oxygen breathing; able to absorb oxygen directly through their skin.  Moisture is critical to the survival of earthworms, giving them shape, enabling them to move, as well as aiding them in absorbing oxygen. They are also photophobic, readily shunning both sun and artificial light, which is why they burrow.  Make sure they stay in a cool, shaded area as they will perform best when the temperature stays between 50-70°F.

Earthworm farmers are rewarded by their crops population doubling every 3 months.  In about 60 days, the bedding contents will have turned into a rich, very black, earthy-smelling compost the deep black/brown and consistency of a chocolate cake. Ten worms-after approximately two years, will produce about eight million little wigglers, roughly a million and a half good breeders and a lucrative income of about $80,000.00 annually.