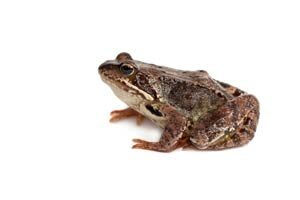 The world’s biggest frog is known as the Goliath Frog. This mysterious frog can reach a weight of approximately 7 pounds and grows to about 30 inches long, including the frog’s legs.

Although the Goliath Frog can get so big as an adult, its increased size is not seen in its eggs or tadpoles, which are about the same size as you see with most average size frogs. This is one reason why this species of frog is so mysterious, as it is unknown exactly why they grow to be the biggest frog in the world.

This type of frog is actually very rare, they can only be found in a small number of rivers located in Cameroon and Guinea in western Africa. Unfortunately, humans are quickly encroaching the rainforests that are this frog’s natural habitat on. Their home is being turned into agriculture land, villages, etc. The rivers that these frogs live in are being damned, causing havoc on their living environment.

Like many other types of rare species, the Goliath Frog is being collected because it is the biggest frog in the world. In many parts of the world private collectors, as well as zoos have been hunting and capturing this frog for well over a hundred years. Unfortunately there is no protection for this species of frog, which means that there is also no restriction on trade. Anyone can buy a Goliath Frog, as long as they are legal to own in your community.

Just out of Cameroon, there are at least 300 of these frogs exported on a yearly basis. This is far too many for a species as rare as this. Due to the fact that these frogs are so rare and fetch a high price, this prompts an increase in export. These frogs can bring an exporter as much as $3,000 each. Fortunately they are not so easy to find and catch, most people who specialize in exporting Goliath Frogs will only catch as few as one or two dozen on each expedition.

In the United States today not as many people are collecting these frogs as they were in the past. In fact, only a few zoos in the US even have a Goliath Frog. Most likely the reason for the decline in their popularity is that people around the world are becoming more conscious of the environment, which includes depleting the population of a rare species.

One of the main problems with collecting this species of frog is that their hasn’t been success in breeding this frog while they are in captivity, additionally, the Goliath Frog doesn’t tend to have a good survival rate when kept in captivity. Considering these two problems, it would seem the only way to ensure this species survival is if their natural habitat is preserved.

If this frog must be harvested for collectors, the best approach would be if the local governments take control and manage the population of the Goliath Frog, only allowing a certain number to be taken each year. Only this way will the biggest frog in the world survive.

The Goliath Frog is not the only amphibian to be in trouble; those all over the world are declining in number. What makes this decline even worse is that scientists don’t seem to be able to discover what is causing the dwindling amphibian populations. Though there is no way to know for sure, it seems likely that man is encroaching on their habitat, like with the Goliath Frog, and this is killing the world’s amphibians.

Now is the time to start thinking of ways that you can save the world’s biggest frog, as well as other amphibians from around the world.