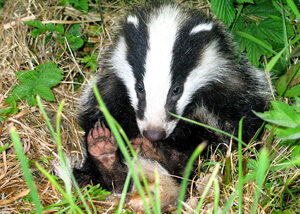 One of the most interesting badger facts is that they received their name by being referred to as an annoyance.  They were once used in a cruel and inhumane European sport where the badger would be confined or leashed and then dogs would be bet on to fight them until one or the other died.  Although these nocturnal creatures either are thought of as an annoyance or go unnoticed completely, they are actually quite intriguing.  Below are the 40 most interesting badger facts that you may enjoy about these fascinating little creatures.