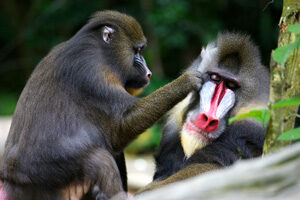 The Baboon Monkey, A Fascinating Creature

The term baboon monkey is not heard often, usually the species is referred to simply as a baboon. Both are correct, baboon monkey perhaps being the most correct or precise, as the baboon is indeed a species of monkey in the family of primates. The baboon monkey is different from most all of its near relatives however in that is primarily a ground dweller, whereas the vast majority of other species of monkey are tree dwellers. The baboon will climb trees in search of food as well as for safety and sometimes a place to sleep, but spends most of its waking hours on the ground. Although the baboon has a tail, as a monkey of course should, it is not a prehensile tail, in other words, the baboon cannot use its tail to grasp things. It cannot hang from a tree branch by its tail.

The baboon monkey is omnivorous, though the bulk of its diet is fruits, seeds, bark and roots. They do however delight in finding a vegetable garden and sampling the various plants, which makes them a pest as far as many African farmers are concerned. When the baboon does eat meat, it is usually a rodent or a bird, or a small or young mammal of one kind or another. Rather than hunting, the baboon tends more to be of an opportunistic eater. If you plant a garden or raise chickens, they will come.

Flock? Herd? Pack? – Baboons travel in groups, called a troop. A troop may consist of a half dozen or so baboons, but more typically there will be on the order of 50 or more baboons observed together at any one time. Their only real predators, besides man, are the lion and the two major types of hyena. Leopards could also be considered a predator, but they are not always a match for a large male baboon. The baboon, being extremely strong, is also a fierce and fearless fighter, and an adult can and will very often chase a leopard away.

There are 5 different species of baboons, ranging from the smallest, the Guinea Baboon which weighs about 30 pounds at maturity, to the largest, the Chacma Baboon which tips the scales at 90 pounds. Only the Mandrill and Mandrillus are larger monkeys. Even though both are sometimes called baboons, both species belong to a different branch of the monkey family altogether. A favorite baboon monkey in zoos, because of its appearance, is the Hamadryas baboon, the male of the species being renowned for its flowing white mane.

Muzzles and Padded Seats – Two of the well known characteristics shared by all baboons is their canine-like snout or muzzle, and their portable seat cushions, nerveless calluses or pads on their buttocks which they enable them to sit quite comfortably. When provoked or placed in a defensive situation, the baboon will often yawn, not because it is suddenly sleepy, but to expose its rather impressive set of teeth. This practice of yawning is also used to establish dominance within the troop. Dominant males get to where they are through physical force and constantly have to rely upon that force to retain the position they have gained.

A Good, Long Life In The Wild – Probably because of their social structure, the fact that they do not have too many predators, and their eating habits, which are not particularly restrictive, baboons have a relatively long life span, about 30 years in the wild, and half again as much in captivity. In the wild, the baboon monkey may be one of the more dangerous members of the monkey family to observe except from a reasonably safe distance, but the fact that it is primarily a ground dweller makes studying this fascinating animal possible and rewarding.