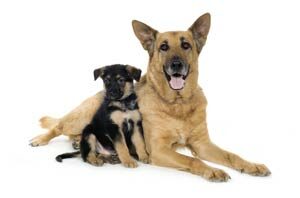 A Few Facts About Alsatian Puppies, And Alsatian Adults

Alsatian puppies can be bundles of joy, growing quickly while maintaining a puppy’s outlook on life until they’ve reached adult size, which is the size a fairly big dog. If you’re not familiar with the Alsatian breed, it’s probably because in the United States we usually refer to the Alsatian as a German Shepherd. The Alsatian and the German Shepherd are one and the same.

Big But Not Bad – As cute as Alsatian puppies are, many people are afraid of the adult dogs. We know some people who had an Alsatian that was positively huge, quite possibly weighing close to 100 pounds, and with a bark you could hear in the next state. This dog loved people, and when it came loping in your direction, with that loud bark, it was more than a little unnerving. But it was one of the friendliest dogs you would ever come across. Almost all Alsatian dogs, if properly trained and cared for, are perfectly safe to be around. The fact that they are so useful as police dogs and attack dogs if need be, has given them an at times undeserved reputation. This has been offset somewhat by recognizing their value as a search and rescue dog. Any dog, if allowed to become a one person dog, or is abused, or not trained the right way, can be dangerous.

Schaferhund – It is important therefore, that if you are going to be choosing your future pet form a litter of Alsatian puppies, you not only know something about the breed, but something about what your responsibilities are in making certain your puppy turns out to be a good citizen. Historically the Alsatian, which comes from Germany was principally used for the purpose of herding and guarding sheep, hence the name German Shepherd, or in German, the Deutscher Schaferhund. The breed is classified by the American Kennel Club as a herding dog.

Conformation – When fully grown, Alsatian puppies will stand about 24 inches, or slightly higher at the shoulder and weigh in the vicinity of 80 pounds, but sometime well over 90. Alsatian dogs come in several colors, the more common being solid black, tan, or grey. When you first get an Alsatian puppy, get into the habit of grooming it regularly. This not only keeps the dog looking good, and feeling good, but the breed is somewhat susceptible to skin diseases, and regular grooming can go a long ways towards preventing such occurrences.

Socializing – Teach your puppy to socialize with people and other dogs as early as possible. It is important than any dog, but especially larger dogs learn this. The Alsatian is an even tempered dog, and only will become aggressive or vicious if it has been taught to be that way.

Feeding – Be prepared to have a dog that is going to grow very rapidly, and therefore be prepared to give it the nutrition it needs. Puppies need two times or more as many calories per day as does an adult Alsatian, so will eat fairly large amounts of food each day until it has reached full adult size, at which time its needs will begin to taper off. Don’t overfeed it though. A chubby Alsatian puppy is not a healthy puppy. Your eventual goal should be an adult dog that is slim, with somewhat of an hourglass shape.

Health Considerations – Alsatian puppies can look forward to living about 8 years if kept in good health. Diseases and disorders most commonly affecting the Alsatian, are abnormally developed hip joints, inflammation of the leg bones, congenital heart disease, and the aforementioned skin disorders. Periodic checkups with the veterinarian, beginning when the puppy is still quite young, is therefore very important.

Just like any other breed, purchase your puppy from a reputable breeder, or if you plan on getting one from a shelter, learn all you can about the puppy’s background and temperament. A person working at a shelter who knows dogs well, can probably give you the best advice as to whether a particular puppy is the right one for you.