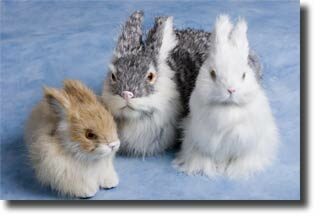 A Quick Guide to Types of Rabbits

There are many types of rabbits, including over fifty species. One of these species is the domestic rabbit, which is the one we normally keep as a pet or raise for food. There are many species of wild rabbits; in fact, in Australia rabbits are so abundant they are considered to be a pest.

There are many breeds of domestic rabbits and purebreds can be registered with several breed organizations. Some people breed and raise purebred rabbits to show. The lop is one of the most popular breeds of rabbits. There are many different kinds of lops, even small ones known as mini-lops. Everyone recognizes a lop because it has ears that are floppy and so long they almost seem to touch the ground.

Many types of rabbits are known for their fur, such as the Angora, whose hair is so long it can be cut and spun to make yarn. Other rabbits, such as the checkered giant, Flemish giant, British and German giant were bred to be raised for meat and are larger than other domestic rabbits. Rabbits come in just about every imaginable color, black, white, cream, buff, gray, orange and many more.

Let’s take a look at a few types of rabbits who are recognized as purebreds by the American Rabbit Breeders Association:

Angoras originated in Ankara, Turkey, and have wool coats that are very long and thick. They are either sheared like a sheep or plucked, and their yarn is spun and used to make clothing. There are French, English and Satin Angoras.

The American Chinchilla is one of the types of rabbits raised for meat. They make a wonderful pet and do not have a fancy coat that is going to need any kind of grooming. Another excellent rabbit pet is the Dutch rabbit. They have very distinctive markings, with white marks on their hind feet and a line down their stomachs. Plus, they have colored circles around their eyes and a white edge that runs down their face.

One of the most recently recognized breeds of rabbits is the Lionhead. It is starting out as a very popular rabbit because, as it names indicates, its face looks like a lion. The breed was developed by crossing a Belgian Dwarf rabbit with a long-haired Swiss Fox rabbit.

The English Spot rabbit makes a great pet. They are white but they have all kinds of black spots, including a butterfly mark on their noses, colored spots down the sides and a black stripe down the back. They are one of the few types of rabbits who don’t mind being around other pets be it a cat, dog, or the like.

The Belgian Hare is really a rabbit and not a hare, as the name might lead you to believe. It was originally raised for meat but now is pretty much only used as a show rabbit or pet. It is a tan-red or chestnut color. One of the reasons many people think this rabbit is a hare or at least part hare, is because of its very large size.

Most types of rabbits make very good pets. They are easy to take care of but many do need daily exercise and some with longer hair will need to be groomed often. They can be very loving and friendly, especially if they have been around people and well-treated since they were babies.