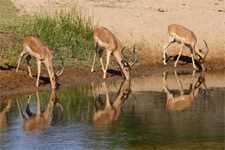 Facts About the Small African Antelope

Another name for the small African antelope is the dik-dik.  These are the dwarfs of the antelope family because of their size.  They do not generally grow to be more than 16 inches tall.  This shows just how small they really are.  This article is going to examine some of the facts related to this tiny antelope so that you will have a better understanding related to their existence.

The small African antelope is going to be gray or brown on the upper parts of their bodies and their tummy areas are going to be white.  The males are going to have very short horns on the top of their heads.  However, these may be difficult to see on some of the antelope because they may be hidden in tufts of hair that can be found on the top of their heads as well.  The nose of the animal is usually long and it comes to a point, making for an interesting snout.  Their faces are also shaped in an interesting way.  However, this shape has many advantages which include helping them be able to get in between shrubs so that they can eat.

The small African antelope likes to eat grass and shrubs rather than meat.  They are going to graze on short grass and they like being in open fields that have short grass that they can eat.  If you spend time observing this animal you may notice that they will move to a new location if the grass in a particular area begins to get to tall.  They are much more comfortable in open areas.  You may be able to find them in wooded areas but only if it is clear enough for them to see.  They do not really need to ingest water because they get all of the water that they need from their diet and the foods that they eat.

You are not going to find large herds of the small African Antelope.  They often live in pairs, a male and a female, and they will mark their territory with the glands that are near their eyes.  This allows them to leave their scent within their territory so that other small African antelopes will not come around.  When the female gets pregnant she is most likely only going to have one.  She does not give birth to several at a time like a cat or dog would do.  The male and female will both take care of the baby.  Once he or she reaches a few months old they will send it on its way so that it can find its own territory.

Most small African antelope are found in Africa, but you may find a few in Asia. Over the years, some of them have been brought into places like the United States so that people can hunt them.

Hunters enjoy hunting these animals because of their great skill and the way they run and jump.  The size of the small African antelope would also provide challenges of its own.

You may never see one of these amazing animals if you are not planning on visiting Africa.  However, they may be found from time to time in zoos and other preservations so that the world can look at them and see how magnificent they are.  If you are interested in viewing one of them you could spend some time on the internet and learn about them.  You can also find out what zoos may be homes to them so that you could see one.  Learning about them can be exciting and interesting but seeing one would be even better.