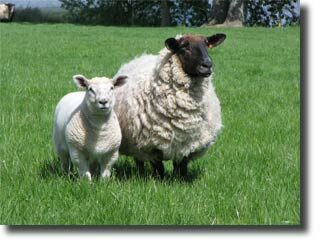 Everyone knows that a sheep is a white creature that grows thick, curly wool used for making a number of things such as clothing but in truth, sheep facts go much further than just an animal that can be sheared. We wanted to take this particular animal and provide readers with unique information that most have never heard. The sheep is generally a gentle animal, one with a sweet personality. Even the song, “Mary had a little lamb” shows how a baby sheep can connect with humans.

Below, you will learn some interesting sheep facts that boost intelligence, could be used for trivia, or just for fun.

Sheep as we know them today come from wild breeds of sheep, those found in western Asia, Asia, Europe, and North America. While a few wild breeds exist, most are now domesticated.

Around 10,000 BC, sheep were first domesticated by people who raised them to become gentle and tame animals. With this type of new environment, several things happened.

Amount of wool increased while the amount of hair decreased

Brown colored wool changed to either white or black

Ears changed from being lopped to erect

Horns began to become weak, reduce in size, and in some breeds, they disappeared completely

In trying to develop more varieties of sheep wool, today more than 200 breeds of sheep now exist, with some having only wool, some only hair, and some having both.

Sheep facts also include different names depending on gender and age, which includes:

A group of sheep is called a Flock

Another one of the interesting sheep facts is that from birth, this animal is quite independent but at the same time, they prefer to be in a group than alone, although some like living a solitary life. Although sheep are social animals, they typically stand together as a means of protection.

Now domesticated and raised to be gentle, today’s sheep is much more nervous and timid than wild breeds. Because they have no real means of defense when faced with danger, they use their flocking skills. In addition, this animal has what is referred to as a “flight zone”. This is space the sheep like to keep between the other sheep so if they need to get away, they have space to run.

Lambs can pick their mother out of hundreds of other mother sheep by her bleat, the sound she makes.

While most sheep will live between eight and ten years of age, records exist showing that some sheep have lived as old as twenty years old.

The last of the interesting sheep facts we wanted to provide is the preferred environment. Sheep like open space but when moving from one location to another, they head into the wind while heading down wind when walking downhill. If sheep are faced with narrow openings or water, they become nervous and will do whatever possible to avoid the situation.