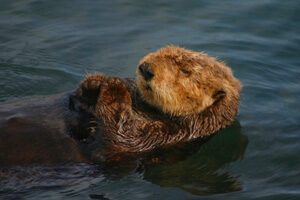 The history of the sea otter should be proof of the dire need to preserve the sea otter habitat health.  These mammals have come back from near extinction, and are now protected by law.  Their return has vastly improved the near shore ecosystem health; evidence of the value of this mammal.

The Pacific Ocean, like every area on earth, has a delicate balance set in place from the beginning of time; a circle of life, if you will.  Each creature preys upon certain other species, and in return is preyed upon by other marine life.  In this manner, no one type of aquatic being dominated the deep and everything remained in balance.  In the case of the sea otter, habitat areas along the coastal regions of the Pacific Ocean were off kilter when the small mammal nearly went extinct.

The sea otter has some amazing features.  It possesses a thick coat of fur containing around one million hairs per square inch; about 50 times the hairs in that one inch than on a single human head.  This extremely dense fur provides a waterproof coat for the cold water mammal, and serves as insulation against the cold as well.  As beneficial as this coat is for the sea otter, humans desired it as well.   Over time, hundreds of thousands of sea otters were killed to obtain that luxurious coat until not a single sea otter was left remaining.  Or so it was believed.

With the extermination of the sea otters, habitat quality quickly dwindled.  The sea urchin population, which was previously held in check by its predator, the sea otter, grew exponentially; feeding copiously on the kelp forests in the shallow waters.  The kelp forests were almost decimated by the grazing habits of the vast numbers of sea urchins.  In turn, fish nurseries that normally inhabited the kelp forests to protect them from predators were virtually unprotected, leaving their numbers open to attack.  In no time at all, the sea otter habitat and ecosystem had become highly endangered due to the lack of sea otters.

In 1938, however, a small group of sea otters were discovered to be living around Big Sur.  Laws were swiftly enacted to protect this group, and the numbers of otters has grown since that time.  With the increase in the sea otter population and their feeding habits on sea urchins, the kelp forests have returned to health as well, and so on throughout the marine life present in the sea otter habitat.

It is clearly evident how delicate of a balance exists within the sea otter habitat.  Not only the mammals themselves are valuable, but the entire ecosystem is fragile and depends upon this natural balance.