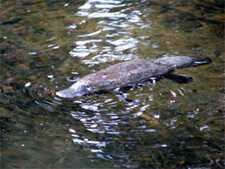 The platypus (Ornithorhynchus anatinus) is almost extinct, so platypus habitat is hard to find. In fact, the only place you can find platypus habitat is in eastern Australia and Tasmania. The platypus is nearing extinction because it was over-hunted for its fur, especially in the beginning of the twentieth century. Today the animal is on the Endangered Species List and is protected by law across Australia. In spite of programs to protect the platypus, it is still highly vulnerable to extinction.

One of the most interesting things about platypus habitat is that even though it is a fur-bearing mammal, it lives in rivers and streams. That is why it is susceptible to the dangers of water pollution, deforestation and irrigation plans. It also has its own share of natural predators, such as crocodiles, snakes, eagles, hawks, red foxes, owls and goannas.

The platypus looked quite strange to the first humans who viewed it and it still is one of the oddest animals on the planet. It is brown in color and the body and tail are covered with fur. It has a very dense coat that can protect it both on land and in the very cold waters it sometimes inhabits. The tail stores fat for survival should the animal need it. The platypus has feet that are webbed like a duck as well as a bill. The feet are designed for swimming, but they fold back when the platypus walks on land. Its snout has eyes, ears and nostrils.

The platypus detects its prey through electroreception. That means they have electric fields which operate when the platypus contracts its muscles. These are electric sensors that are located in its bill. The platypus uses receptors to catch the signals that indicate preys are nearby. It can then set about locating food, insect larvae and annelid worms that live in stream beds. They also eat freshwater shrimp and crayfish. The platypus has special pouches in its cheeks where the catch is kept until it reaches a surface where the mammal can feed. A platypus spends much of each day foraging the stream bottoms as it needs to eat around twenty-percent of its body weight every day. The platypus is a nocturnal creature and does all of its feeding at night.

Male platypuses produce venom as a defense. The venom is strong enough to kill small animals and even dogs. In humans, the venom causes incredible pain and can even incapacitate a person for a time. It is common for edema to spread around the wound. It can take many months for the wound site to return to normal.

The platypus mates once a year between June and October. Unlike most mammals, after mating, the female digs a burrow to protect her eggs from harm. She often uses folded leaves to make it soft. It is also thought that the leaves help maintain the proper humidity levels. She lays two or three soft-shelled eggs. These stick together and attach to a patch on the stomach of the female. The tail holds them in place. The young hatch in around ten days.

The platypus female has milk patches on her stomach from which the young feed. They live with her in the burrow until they are approximately three or four months old. The young have to leave to find their own territories at that time. Because they compete with adults for both burrows and food, not many of the young survive.