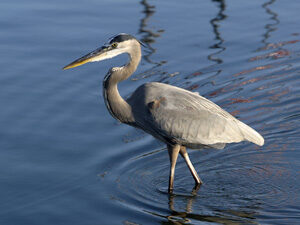 Looking For A Heron Deterrent?

Admittedly, not everyone with a backyard pond is in need of a heron deterrent. The beautiful blue bird may even be a welcome sight, until you decide to stock your pond with goldfish, koi, or another fish of your choice. The heron isn’t known to be particularly fussy about which kind. To a heron, “fish is fish”.

It isn’t just private pond owners that feel a need to find a heron deterrent of one type or another. Some years back, in a Seattle marina, the fisheries department had an enclosure immersed in the salt water, which contained a large number of salmon fingerlings. The size of this enclosure was approximately 6′ by 6′, with the sides sticking up about 6 inches above the surface of the water. A blue heron took up residence one day and contented itself by gorging on the little salmon. Finally a wire mesh was placed over the surface of the enclosure. Then the entertainment began. The heron kept returning, and kept fishing, as the openings in the mesh were about 2 inches square, or just big enough for the heron to get its beak through. Problem was, it could still catch fish, but couldn’t pull them through the mesh, as they were usually sideways in its bill. It tried, and tried again. It must have been frustrating for the heron. Fishing was good, but it got little to eat. It was also frustrating for the fisheries people, as now they had a large number of badly mangled fish to contend with. It wasn’t long however until a finer mesh was installed, which proved to be an effective heron deterrent.

The method described above isn’t really suited for a garden pond, as covering everything with a wire mesh detracts from the pond’s aesthetics. There are fortunately other ideas one can implement that offer a reasonable solution to the heron deterrent problem.

Method 1 – Hide your fish. This isn’t totally foolproof, since if a heron knows there are fish in a pond, it can be very patient. Still, having a place such as a cave, for your fish to hide in may cut down on your fish loss significantly. There are commercial “caves” and shelters, many shaped like little Quonset huts, one can buy and place in the pond. A more natural approach is simply to build one or more hiding places out of rocks, using 3 or four stable rocks for support and a flat rock for a roof. Fish like places to hide and get out of the light anyway, so you won’t have to coax them to use it. This method is likely the most aesthetically pleasing, as it is the most natural. A number of plants in the pond also help as fish can hide amongst the plants as well.

Method 2  – Get another heron. In this case though, the other heron is fake one. Herons are very territorial birds, and one passing by is unlikely to visit a pond if it sees another heron has taken up residency. It is not going to hang around to see if the heron it spots is fake or real, but instead will seek another place to fish, and will likely not return.

Method 3 – This may well be the most effective heron deterrent, but is undoubtedly the hardest to put in place.  Herons and crows tend to not get along well at all. In fact crows will gang up on, and mercilessly pester, a heron almost any chance they get. The problem is, how to attract crows on to your property? Another problem is, do you really want a flock of crows as permanent residents on your property? If you do have crows in your neighborhood though, don’t shoo them away, as they will act as a natural heron deterrent.

Method 4 – This is really a combination of things, such as a scarecrow, noisemaker, water spray, or anything that creates a bit of a commotion or appears threatening to the heron. You can use your imagination on this one, but stick to something that won’t bother the neighbors too much.

Method 5 – It’s also possible to find variations on the wire mesh idea for a pond. There are plastic rings and netting on the market which can be installed so as to not be overly noticeable. You don’t necessarily have to cover every square inch of pond surface either. Sometimes just some netting along the edge will suffice. Or, you can simply forget the fish and enjoy your heron. The problem with that is, once the fish are gone, the heron will probably leave as well.