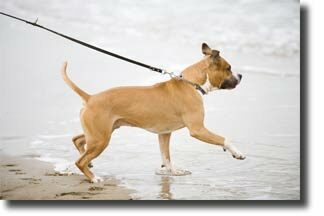 How To Deal With An Aggressive Puppy

When one thinks of an aggressive puppy, it’s usually a puppy that bites either other puppies, people, or both. Aggressive puppies have other behavioral patterns as well. They may be disobedient, loud, and have a tendency to jump up on people. Jumping on people is not necessarily an act of malice, but certainly shows a lack of respect.

At the risk of oversimplification, if you have an aggressive puppy, the cure is for you to become the Alpha dog. You must be the leader of the pack, and the puppy must recognize its subservient role. This of course is more easily said than done.

The problem can be genetic of course, but this is rarely the main reason behind aggressiveness. If you observe a litter of puppies when they are in motion, you’ll note a variety of personalities. One or more of the litter may indeed show a significant amount of aggression towards its litter mates. Puppies at this stage however go through a socialization stage, where they generally learn to get along with others in the litter. The next stage is to for the puppies to learn to socialize with humans. If a puppy has not gone through this stage at an early age, the seeds may well have been sown for problems down the line.

When you first bring a small puppy into your home, there are two things you definitely do not want happen. One, you must not allow children or other pets to bully or tease the puppy. Fear and discomfort can easily turn it into an aggressive puppy, as it tries to defend itself. The second thing, and perhaps a more common reason behind aggressive behavior, is leaving a puppy alone for extended periods of time, especially right after it has been introduced into the household. Puppies left alone may become bored, suffer from anxiety, or both, and out of frustration may lash out.

Of course if your puppy becomes ill or is injured, even slightly, it may become aggressive, usually out of a feeling of needing to protect itself. Finally, some breeds are “wired” to be protective of their surroundings, and your puppy may be exhibiting behavior which is more normal for that breed. The aggressiveness still needs to be dealt with, most certainly if the puppy is going to grow up to be a large dog. Puppies naturally nip and mouth, and they must be taught immediately that this is not allowed. Very often, by giving the puppy something else to chew on when it starts mouthing your hand is enough of a lesson.

To curb aggressive behavior, you really have a head start with a young puppy, if for no other reason than you are a lot bigger than it is. That doesn’t mean you beat up on the puppy when it shows signs of aggression, but rather you are firm in letting it know when a certain behavior is inappropriate. You need to teach the puppy what “No” means and you need to teach the puppy to learn to live on your schedule, not its schedule. And, don’t forget to give your puppy plenty of praise, and an occasional treat, when it does things right. In summary, learn to be the leader of the pack, and learn to say “No”, and you’ve probably already won half the battle with an aggressive puppy.