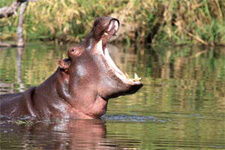 The Answer To The Question- Where Do Hippos Live?

If you ever asked yourself where do hippos live? it depends on the type of hippo. Large or common hippos live all over the continent of Africa. While pygmy hippos only live on the western side of Africa. They thrive next to a river or pond and live in grassy areas where there is a steady supply of food. An average hippo has been known to eat over one hundred pounds of grass a day. It is not only important to know where do hippos live, but also their habits in the wild.

Hippos are the third largest animal on earth and weigh in only after elephants and rhinos. Since they are so large they need to stay cool through out the day. The hippo does not sweat, much like the pig. Instead they secrete a clear substance to stay cool. They are relatives of the pig, so if there isn’t much water available to swim in they cover themselves in mud and roll around in it. The mud acts like a sunscreen and protects the hippo skin from sun damage. You can find hippos lying around during the day either soaking in water or covered in mud. They are nocturnal and only come out to eat at night.

If hippos are nocturnal where do hippos live at night? As soon as dusk comes hippos start to wake up. They leave the water and start to search out grassy areas. They will continue grazing until dawn. The biggest reason why hippos choose to eat at night is because it is cooler.

The hippopotamus is sometimes called a river horse because it spends so much of its life in rivers.  They can actually spend a full twelve minutes under water. Although they usually only go under for around five minutes and return to the surface quickly. They are not great swimmers but they can dog paddle and also walk on the river bed if it is shallow enough. The main reason these animals stay in the water so much is because it is healthier for their skin to stay moistened at all times. Dry skin can do damage and cause discomfort.

Hippos are not usually aggressive animals, unless they have a calf. The mother hippo does not like any person or animal around her and her baby. If anything does venture near, the mother can become aggressive and attack. Even animals like lions and crocodiles will not pursue a baby hippo. The mother can be unseen by other animals floating in a river but she will always have her eyes above water so that she can keep them on her calf. Female hippos can also leave one mother in charge of the babies, while the rest relax and swim.

The male hippos are very aggressive when it comes to mating. The biggest male hippos will challenge each other and fight over the right to mate. They open their mouths wide and who ever has a smaller mouth usually runs off in defeat. The larger mouth hippo has gained the right to mate with every female. On occasions the male hippos do fight and slash each other with their sharp teeth. The fight will go on until the loser leaves. These fights are usually very short and there is rarely a fatality.

Where do hippos live when they are pygmy type hippos? The pygmy hippo lives on the western side of Africa. They are just like common hippos but are much smaller. They share all the same habits and like the same areas. The only big difference between a pygmy hippo and a common one is that the pygmy is becoming extinct.