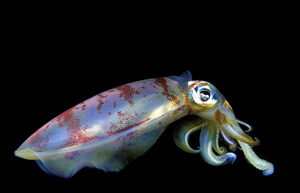 While squid reproduction as a topic hasn’t been widely documented or studied, most of the basic facts seem to be known. One reason may be that squid, especially the larger species are often found in very deep water where things go on that we know little about. In addition, most squid live what appears to be a rather brief and brutal life, where if they are not being eaten by predators they may be eaten by members of their own species. Enough have been observed while mating however to give us a good idea as to just what takes place.

One thing we do know about squid reproduction is that it takes place in a rather crowded setting. When squid reproduce they do so while swimming about in large schools. Whether this is true of the giant squid or not isn’t exactly clear, as some of these behemoths spend much of their time in the depths of the ocean.

Round And Round We Go – In any event, when it’s time to mate, squid congregate in a large school and begin to swim around in a large circle. They swim in a very irregular manner at first, like a square dance that’s somewhat out of control. After a time however, the swimming pattern becomes a bit more predictable, and at different times during the process, male and female squid will begin to pair up. They will continue to swim round and round together prior to and during mating.

Color Means Everything – Squid are known for their ability to change color, and they will do this as they begin swimming around in circles. It’s believed that the males change colors or color patterns to attract a female, although just what color or color pattern seems to work best isn’t always clear. For their part, the females undergo some color changes as well, presumably to indicate their degree of receptiveness towards a new mate. Pity the poor male who may pick a female of the wrong color, for if she’s not receptive she may kill and eat the male rather than mating with him. Usually though, the female shows the right color when she’s ready to mate.

A Lengthy Process – It should be noted that this business of swimming around in circles to attract a mate isn’t something that starts and stops in a relatively short period of time. It’s been observed that in many cases it can be nearly a day-long event, starting early in the morning, with the squid become more and more animated, presumably more excited, as the day wears on. Exactly what triggers the event is somewhat open to speculation, as is what goes on as far as communicating the fact the event is about to begin. It’s been observed that some of the squid participating come from long distances. Something, perhaps instinct, tells them the time and place the squid reproduction ritual is to happen.  It’s also been observed that there is a certain amount of infighting going on during the circling around, perhaps occurring whenever two or more male squid become interested in the same female.

The female squid has a small pouch or sac, actually an ink sac, beneath her gills, which also contains her eggs, of which there may be thousands produced at one time. During mating the male places his sperm in this sac using one of his arms, an arm which is shorter than all of the others.

Although the squid protects the eggs to some extent only a few of them ever become offspring, as the vast majority are eaten by various predators. This is a good thing, as several hundred squid, each producing several thousand eggs, would result in an ocean packed with squid, not leaving room for many other species.